More
Facebook
Linkedin
Twitter
Home News Costa Concordia Refloated and will soon be towed away and broken up... 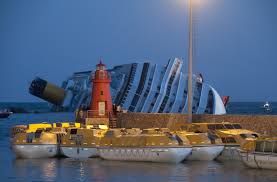 The wreck of the luxury liner Costa Concordia was refloated on Monday and will soon be towed away and broken up for scrap, more than two years after it capsized off the Italian coast, killing 32 people.

The 290-metre Costa Concordia ran aground on rocks near the Tuscan holiday island of Giglio in January 2012. The rusting hulk of the once gleaming-white ship had been resting on a temporary platform since being righted a year ago.

In what has become one of the largest salvage operations in history, air was pumped into 30 large metal boxes, or sponsons, attached around the hull of the 114,500 tonne ship. The air forced out the water in the sponsons, lifting the vessel more than 2 metres off the underwater platform.

Tug boats then attached cables to the ship and shifted it about 30 metres away from shore.

"Little bit heavier than we estimated, but she is up," salvage master Nick Sloane told Reuters, saying that Monday's activities had been "perfect".

Work will start again on Tuesday to prepare it for towing within days to Genoa in northern Italy to be scrapped.

"We have to connect some more chains and some wires and do a calculation on exactly how heavy she is now and then on Wednesday, Thursday bring her up properly," Sloane said.

Franco Porcellachia, the engineer in charge of the salvage, said the sixth deck of the ship had started to emerge on Monday, and once that was fully above the water the other decks would become visible in quick succession.

"When deck 3 re-emerges, we are in the final stage and ready for departure," Porcellachia said.

The wreck is due to depart Giglio on July 21.

The ship's captain, Francesco Schettino, is on trial on charges of manslaughter, causing a shipwreck as he sailed too close to shore to "salute" the port, and abandoning ship. He is fighting the charges.

Once the Concordia has left Giglio, the search will continue for the body of the last person who was aboard the Concordia the night it sank and has not been accounted for.

"We are undertaking an operation that will close a dramatic chapter for our country," Italian Environment Minister Gian Luca Galletti said at the news conference.

Paying for the disaster, including breaking up the vessel and repairing the damage to Giglio, is likely to cost the ship's owner and operator Costa Crociere, a unit of Carnival Corp , more than 1.5 billion euros ($2.05 billion), its chief executive said last week.

The cruise liner will be demolished and scrapped in Genoa by a consortium including oil services company Saipem and Genoa-based companies Mariotti and San Giorgio.