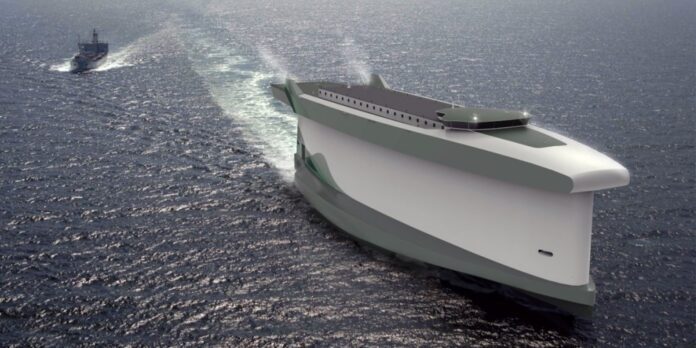 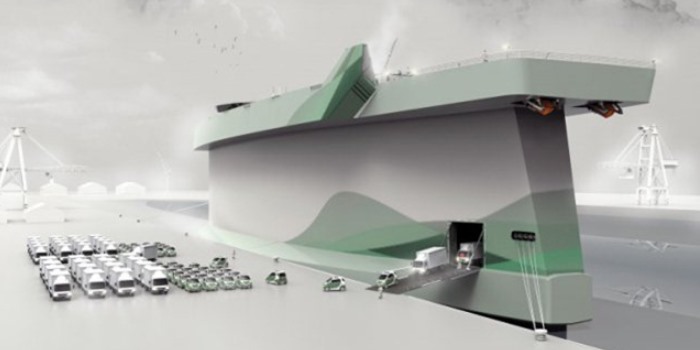 It would be something of an understatement to describe it as a futuristic ship for the next generation of environmentally-friendly maritime vessels.

With a hull shaped like an enormous sail to harness wind power and propel the vessel forward, the Vindskip (Windship) concept could revolutionise the cargo shipping industry.

The designers behind this exciting concept say it will reduce carbon emissions by up to 80 per cent and cut fuel consumption by almost 60 per cent.

Clearly the most striking feature of this ingenious creation is the aerodynamic hull which, by acting as a giant airfoil, could save almost two-thirds of the energy used by conventional cargo vessels.

The Norwegian design company working on the Vindskip development has based its maritime model on the aerodynamic lift principle used in aircraft design. This uses the shape of the main hull to generate positive lift as the engines power the aircraft forward.

Lade AS, the design company, has created a giant sail-shaped hull for Vindskip which, they say, will generate a forward thrust towards the apparent wind – the wind as moving objects experience it, like the actual flow of air acting on a sail. The symmetrical airfoil will harness wind forces similar to aerodynamic lift to pull the ship along its course. Vindskip’s advanced on-board technology will constantly calculate both the direction and speed of the wind with the symmetrical hull developed to generate lift from wind on both port and starboard sides. These systems would provide a positive pull for at least 45 per cent of the journey when the ship travels at speeds of 16 knots or more.

It is unlikely that the ship would ever be 100 per cent wind-powered. Designers intend using a liquefied natural gas (LNG)-powered electrical generator to provide the power required at the start of the journey and en route. However, as the hull operates in tandem with a LNG engine, it will be able to take full advantage of the apparent wind created by the forward propulsion.

An advanced computer navigation system would use complex global positioning system (GPS) algorithms and weather satellites to plot the most energy-efficient and cost-effective routes. Cruise control technologies and special navigation software will monitor wind conditions ahead and calculate the most appropriate route for the ship’s optimum performance – giving ship managers and fleet operators a choice of the quickest or most economic route and other options.

Vindskip is an imaginative concept to use renewable energy for propulsion. When the concept is applied to the commercial fleet it could be regarded as revolutionary. Using the wind’s negative drag forces, and turning them into positive energy pull to generate lift and forward propulsion, amounts to a significant breakthrough. Now Project Vindskip, as it is known, is moving a few steps closer to commercial reality. Lade AS hopes to license the design to shipbuilders around the world. The revolutionary car carrier design includes space for up to 7,000 vehicles and the company believes that one day it may also be the design of choice for some of the world’s largest cruise ships.

Small-scale models of the pioneering hull have already been tested successfully in a wind tunnel at Cranfield University in England although the projected emissions and energy-saving efficiencies have yet to be tested at large scale. Computational fluid dynamics (CFD) testing on the underwater hull is scheduled this year followed by further tests in a model tank.

Company founder, innovator and Vindskip creator Terje Lade is talking with ship owners and shipyards about his plans to commercialise the ship design and is confident that the first Vindskip ship will be built within three years. The project is being funded by Innovation Norway, a government agency, two private investors and Lade.

Take a glimpse into the future by watching this video to see how the Vindskip concept would work. Meanwhile here is some further information about the concept ship's wind power system, cruise control and navigation optimising system.