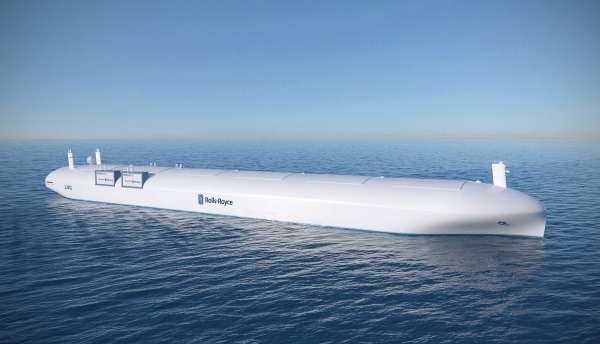 As unmanned and automated technologies continue to advance on land and in the air, Rolls-Royce's marine division is looking to implement the idea at sea with its recent unveiling of a draft design for an unmanned cargo vessel that would be run from a land-based control centre. The technology has the potential to revolutionise the industry, but there are huge regulatory hurdles to overcome. Could unmanned vessels be the future of shipping, and what effects could this sea-change have on the industry?

With self-driving cars clocking up thousands of test miles and e-retailer Amazon pledging to make its first aerial drone delivery in 2015, unmanned transportation is very much of the moment. While land and air-based drones have been in development for a number of years, things on the water have yet to pick up steam.

That may be about to change with maritime manufacturing giant Rolls-Royce highlighting the potential for a combination of ship-based sensors and computers and office based navigators to replace the traditional ship captain. Discussing the possible future of shipping, Rolls-Royce VP of innovation, engineering and technology Oskar Levander said: "Is it better to have a crew of 20 sailing in a gale in the North Sea, or say five in a control room on shore?"

With technology already at a point where machines and vehicles can be controlled from a distance, the company expects tasks like engine and equipment monitoring and certain underwater operations carried out in the offshore sector to become the first to be carried out remotely.

Before long though, Rolls-Royce foresees automation bringing about a more profound change in fleet optimisation. "When [it] is considered, the advantages compound," said Levander. The same person can monitor and steer many ships. As conditions ashore are often preferred, it will also help retain qualified and competent crew, and is safer."

Particularly in the world's more dangerous waters, shifting crew from sea to office would provide very real safety improvements, replacing the threat of being held hostage by armed pirates with the more mundane risks of repetitive strain injuries and other office-based complaints. But the main thrust of the business case being posited by Rolls-Royce is focused on financial, rather than human, costs.

For a start, the removal of the crew would also remove the need to provide all of the infrastructure and supplies that are essential to keep them ready and able to work. Their absence would cut the need for sleeping quarters, food supplies, furniture and all manner of things that are installed or designed on a ship to factor in human action and interaction.

Commercial ships could one day reduce their dependence on fossil fuels by harvesting energy from the waves.

No need for human facilities

"Many facilities and systems on board are only there to ensure that the crew is kept fed, safe, and comfortable" said Levander.

"Eliminate or reduce the need for people, and vessels could be radically simplified. Attitudes and ways of working will need to change, but safe operation is possible, particularly for vessels running between two or three fixed points."

For ship manufacturers and designers such as Rolls-Royce, automating shipping would create the opportunity to think about the vessel as a whole without pausing to assess it in terms of the sum of its parts. As Levander explained: "In the future, we must not think of a ship as a number of separate processes or systems, but as a whole where all aspects affect the other."

In a paper on unmanned vessels, Hans-ChristophBurmeister of the FraunhoferCenter for Maritime Logistics and Services and Ørnulf Jan Rødseth of the MARINTEK Department of Maritime Transport Systems raised intercontinental dry bulk carriers as likely to become the first class of ships to operate unmanned.

They said: "This kind of vessel is arguably the most interesting one for implementing unmanned vessels due to their long deep-sea voyage and generally low-risk cargo."

"Is it better to have a crew of 20 sailing in a gale in the North Sea, or say five in a control room on shore?"

The researchers, who are working on the EU-funded MUNIN project to develop a concept of unmanned autonomous ship operation, propose that such ships would operate autonomously under normal circumstances while remaining in 'remote monitoring mode' with a Shore Control Centre (SCC).

For this, the onboard computer would require the ability to control the ship engine, detect small objects and weather phenomena, be capable of avoiding collisions with all objects and maintain stability in harsh weather conditions. They also highlighted specialist capabilities for possible emergencies and system failures.

While sophisticated systems that can analyse complex and comprehensive data to chart a safe course are very much within reach, challenges remain. On the regulatory front, the first hurdle is the fact that under international law, unmanned ships are illegal. Should the principle be accepted, there would still remain a huge regulatory challenge, with new codes and standards from various regulatory jurisdictions needing to be worked through.

The fact that self-driving cars and unmanned aerial vehicles continue to develop indicates that overcoming regulatory challenges is conceivable. The challenge may be greater for shipping, with regulations having to be harmonised across various international bodies and governments, but overcoming it remains a prospect.

The greater threat is whether the industry will embrace the idea that computers can replace people. International Transport Workers Federation seafarers' section chairman David Heindel remains unconvinced, telling Bloomberg: "The human element is one of the first lines of defence in the event of machinery failure and the kind of unexpected and sudden changes of conditions in which the world's seas specialize. The dangers posed to the environment by unmanned vessels are too easily imagined."