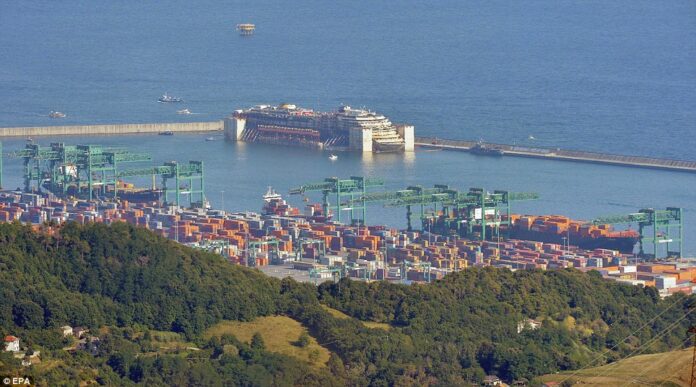 (Time-lapse video link at the bottom)

The 300-metre, 114,000-tonne vessel set off from the Mediterranean island on Wednesday after a massive marine salvage operation to stabilise and re-float the ship. The final docking manoeuvres are expected to take several hours with hundreds of onlookers coming out to watch. Prime Minister Matteo Renzi was scheduled to attend the operation's conclusion later on Sunday.

The Costa Concordia was towed north by four tug boats and 10 escort ships. Its voyage was closely monitored for any toxic spillage. The cruise liner was emptied of fuel two months after it was shipwrecked, but it still contains about 163 tonnes of oil and 12 tonnes of toxic substances held in sealed containers, according to Italian authorities.

A team of engineers who worked on the salvage on behalf of owners Costa Crociere, an Italian subsidiary of the US-based Carnival Group, monitored nautical progress from a special on-board control room, installed in a container on top of the vessel. Its dismantling in the waters off the north-west city of Genoa is expected to last two years and employ almost 1000 people. About 40,000 to 50,000 tons of steel are expected to be recycled from the wreck. The Concordia ran aground on Giglio on January 13, 2012, after being steered too close to shore. Thirty-two of the 4229 people onboard were killed, but one body was never recovered. A diver also died during the salvage work in February.