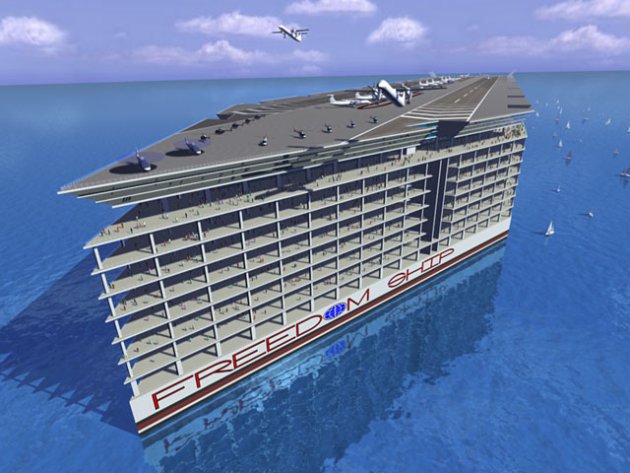 Forget Boris Island – a far more ambitious concept to build an entire floating city plus airport remains in play, although numerous problems associated with the scheme mean it may never see the light of day.

The Freedom Ship – in effect a self-contained city-cum-commercial aircraft carrier – would circumnavigate the globe every two years. As the largest vessel in the world, it is designed to accommodate up to 80,000 people (50,000 permanent inhabitants, predominantly wealthy, as well as tourists and business visitors), 20,000 crew, plus schools, leisure areas, restaurants, offices and business facilities.

Freedom Ship would even have its own fleet of aircraft operated by FSI. However, residents are encouraged to own and operate their private aircraft and helicopters. Hangar space below the flight deck will be available for lease to residents and visitors. A flight school will also operate on the ship.

FSI insists that the airport would be designed to shield the residential and commercial districts of the city-ship from noise, adding that if the noise turns out to be “detrimental to the overall quality of life aboard the ship”, the airport would be redesigned to handle helicopter traffic only “with the remaining real estate used as an additional nature preserve”.

It sounds like an ingenious project but for several reasons Freedom Ship has made little tangible progress since it was unveiled in the 1990s. FSI has repeatedly encountered difficulties in financing the vessel, let alone building it – the latest cost estimate is USD10 billion, and that figure could be on the conservative side for a project of this size. FSI believes it needs USD1 billion to begin construction.

The maritime industry has never attempted to build anything as gargantuan as Freedom Ship.The heaviest ship in the world today by gross tonnage is a 275,000-tonne supertanker.

Operational problems include the fact that there are no dock facilities anywhere in the world to accommodate such an enormous ship, so it would have to drop anchor approximately 15 miles (km) offshore in international waters. Like the Flying Dutchman, it would roam the seas forever, destined never to make port.

The sheer size of Freedom Ship also makes the Suez and Panama canals unnavigable – and there would be considerable logistical difficulties in provisioning a vessel that is permanently at sea.

From an aviation point of view, public statements from FSI do not specify the type of air traffic control facilities on Freedom Ship, and any pilots operating to and from the vessel would need to be rated for aircraft carrier landings and takeoffs.

The Freedom Ship would use renewable energy (wave and solar power from photovoltaic arrays) but the presence of this behemoth on the high seas is bound to trigger protests from environmental activists – including those opposed to airports on land.

Last but not least, extra diligence would be required to guard Freedom Ship against attack. Aviation infrastructure remains a high-value target for terrorists – and given the piracy problems affecting the maritime industry in recent years, the prospect of attacking a vessel which also houses an airport may be doubly hard to ignore.