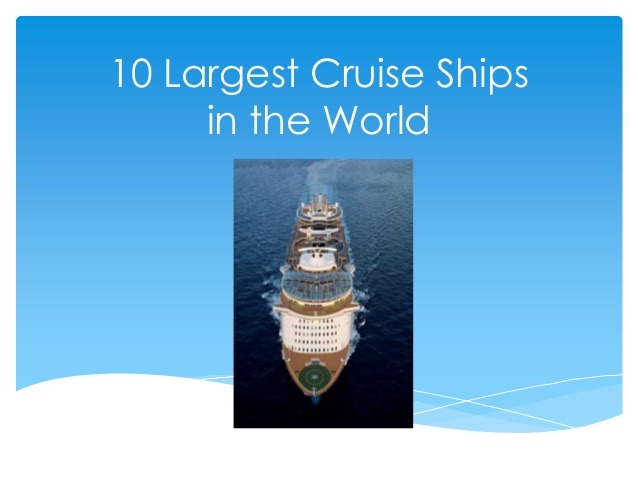 i) Freedom of the Seas

Freedom of the Seas is a International cruise ship. It is around 1111 feet long. The capacity of holding passenger is 4370. Freedom of the Seas can provide many type of facility in which water park for the kids, 3D movie theater, ice skating rink and spa.

ii) Allure of the Seas

iii). Explorer of the Seas

Explorer is in the list of top 10 biggest cruise ships in the world. The capacity of holding passenger up to 3114. It is 1020 feet long and the total weight of the ship is 137308 tons excluding its passengers.

iv). Liberty of the Seas

MSC Fantasia is an Italian Fantasia Cruise Ship. Total weight of Fantasia is 133500 ton excluding the passenger. It is largest ship operated by MSC Cruise.

MSC Preziosa is Fantasia class cruise ship. it is operated by MSC Cruise. The dimension of Preziosa is approximately 333 meter in length and 38 meter in width. In MSC Preziosa also a casino and Aurea Spa.

Norwegian Epic is the third largest cruise ship in the world. It can carry up to 4100 crews and passengers. Its total weight is 155873 tons. It is belongs to the Norwegian Cruise Line Company.

viii). Oasis of the Seas

Oasis of the Seas is an Oasis class Cruise Ship that is belongs to the Royal Caribbean International. It is so big that can carry up to 6296 crew and passengers. It is 1187 feet long. Oasis of the Seas is the largest cruise ship in the world until 2010.

Queen Mary 2 is a cruise ship named by Queen Elizabeth II in 2004. Queen Mary 2 and Oasis of the Seas is only two cruise ship that is belongs to the Royal Caribbean International. It is approximately 1132 feet long. The maximum capacity of holding passenger up to 3056.