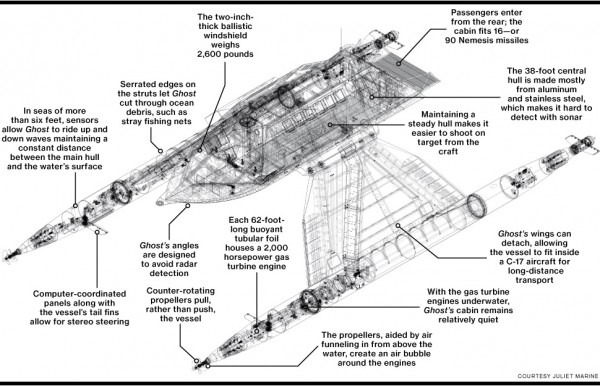 It looks like a half-submerged X-Wing, or maybe a Star Trek Shuttle, but it's actually Ghost, one American start-up's vision for what an attack helicopter designed for the navy might look like. Mustering 4,000 HP from two engines on the end of powered legs, Ghost promises to whip across the ocean in a supercavitation bubble, avoiding radar and with a silky smooth ride for the crew inside. What makes the boat special is how it improves on hydroplane technology, more commonly used in racing boats. Hydroplanes increase their top speed by skimming across the top of the water, rather than burying their hulls in it, reducing drag in the process.

However, that also makes them relatively unstable and prone to flipping - so, Ghost's manufacturer Juliet Marine Systems turned to supercavitation, which creates a bubble of gas around each of the legs and cuts drag by a factor of 900. Air is pulled down through the struts, while the propellers are at the front of the 62 foot long tubes, effectively pulling the vessel along. Unsurprisingly it took a few years to get the system working, and during that time the US Office of Naval Research wasn't especially impressed, Bloomberg Businessweek reports. Meanwhile, a potential DARPA grant fell through because it would've required exclusive access to Juliet Marine's patents; instead, company founder Gregory Sancoff wants to license the technology more broadly.

CLICK HERE TO SEE THE GHOST BOAT DURING TRIALS

The goal is still to sell Ghost to the Navy for around $10m per boat, each capable of transporting sixteen people plus boat crew through 10 foot seas and higher without spilling their drinks (or the contents of their stomachs). Sancoff argues that Ghost can do something no other current Navy vessel can: act as a bodyguard to other, slower ships, as well as sit stealthily near troubled areas and monitor foreign troop movements, tap electronic communications, and more. Unfortunately, looking cool isn't one of the factors that necessarily convinces the US Navy to invest in a vessel. Back in 2012, for instance, Sea Shadow - the stealth boat that inspired James Bond movie Tomorrow Never Dies - was auctioned off for $3.2m, though with the proviso that the distinctive (but slippery-to-radar) craft be broken down for scrap by whoever bought it.