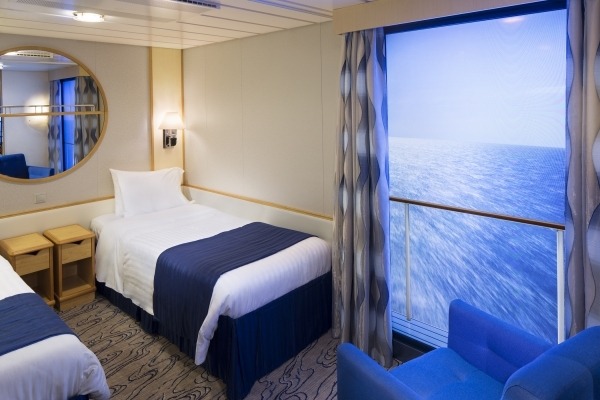 With virtual balconies, customised apps and high tech in-room gadgetry, the cruise industry is personalising and upgrading the in-cabin experience in innovative ways that makes modern cruising almost unrecognisable from its former self – and there’s more to come.

Not long ago Christine Duffy, president and CEO of Cruise Lines International Association (CLIA), said that the size of ships, such as Royal Caribbean's Allure (full capacity is 6,360) was likely to be as big as it gets and that the new emphasis is "on more bells and whistles". As unique entertainment and dining options are introduced across the board, attention is also being paid to passengers' cabins, enabling travellers to personalise their in-cabin experience in a way that wasn't possible before.

Focusing on "bells and whistles"

"The 'bells and whistles' of the cruise industry are unparalleled in any other area of travel and are among the major factors in driving interest in cruising worldwide," explains Duffy. "In-cabin customised services are becoming more popular in the cruise industry as they afford cruisers a touch of luxury and a personalised experience which enhances any vacation."

There is no doubt that cruise ship dining and entertainment is reaching new heights. On-board bumper cars, skydiving simulators, Celebrity Cruise's "Top Chef at Sea" experiences (where passengers can sail and dine with contestants from Bravo's Emmy award-winning series), and Royal Caribbean's London Eye-style capsule North Star (which offers 360-degree views of the sea) - these are just a few examples of the range and level of the new innovative offerings available on board.

"Cruise lines are putting an emphasis on offering more on board rather than just building larger ships," says Adam Coulter, the UK editor for Cruise Critic, a leading cruise review and information site. "New builds typically have some kind of never-seen-before-at-sea feature. We can see this from looking at the upcoming launches such as Royal Caribbean's Quantum of the Seas and Anthem of the Seas, which are the first and second of the next-generation ships for the line."

One of the most talked about in-cabin innovations is Royal Caribbean's virtual balcony; an 80-inch high-definition screen offering real-time views and sounds of the ocean. First introduced on Navigator of the Seas, they will be available in 373 inside cabins on Quantum of the Seas, which is planned for delivery in November 2014. The balconies enable passengers to experience sunrises and sunsets, as well as ports and destinations in every stateroom.

"The idea for the Virtual Balcony came from Richard Fain, our chairman and a small team of dreamers at Royal on the entertainment technology and IT teams," says Ronnie Farzad, manager of entertainment technology for Royal Caribbean who is based at the company's headquarters in Miami. "We developed the Virtual Balcony concept internally but leveraged the services of Control Group (an agency based in New York) for the programming. I personally demoed the technology to several groups of journalists: the sounds and visuals of the ocean transformed the formerly-inside staterooms on Navigator of the Seas."

On Avalon Waterways, passengers can now experience Open-Air Balconies in the majority of rooms - a 7ft wall of floor to ceiling windows that open up, making the room one big balcony - and many lines now offer spa cabins that are positioned with close proximity to the ship's spa area. Celebrity's Reflection ship's AquaClass offers suites with 79-square-foot verandas as well as exclusive amenities, unlimited access to the AquaSpa and complementary access to its speciality Blu restaurant.

Kevin Bubolz, director for business and marketing in Europe at Norwegian Cruise Line (NCL), says that giving passengers a choice of in-cabin options is an important aspect for the company, given that choice is inherent in the liner's Freestyle Cruising product. Options range from 24-hour room service and, for suite guests, white tablecloth in-suite dining to a varied television programming including recordings of entertainment taking place on the cruise.

"Cruise lines are putting an emphasis on offering more on board rather than just building larger ships."

"The TV now does so much - you can use it to book dinner, check your on-board account, and so on - it's a key piece of service, says Coulter. "Using the in-cabin television for things like making reservations for dining and excursions, checking folios is not new, but it's a better process now."

Norwegian's iConcierge app can be used on the guests' mobile devices on several ships such as Norwegian Epic and Norwegian Breakaway and allows passengers to access on-demand information and real-time services, including excursions, restaurant menus and bookings, on-board and spa services and phone calling.

"The iConcierge app allows guests to connect while on board, and on all our ships, through Wi-Fi and in internet cafés, our websites can be accessed free of charge," says Bubolz.

"The number of 'free' sites accessible to passengers while sailing is growing," says Coulter, adding that MSC, Costa and Disney also have apps. "While on board a ship, passengers can usually access, for free, the cruise line website and all its properties. The higher grade suites on many lines include iPads, and you can use these in the same way you use the TV for booking tables in restaurants and so forth."

Farzad says cabin technology provides entertainment and self-service, both of which enrich the guest experience on board, and explains that Royal Caribbean have experimented with company-owned mobile hardware. "We realised that while this technology had many benefits, growth in the tablet and mobile markets have meant guests prefer to use their own devices," he says, adding that, in addition to self-service, tablet and mobile devices provide guests with a sense of home and connectivity. Interactive TV services provide guests with room service and on-demand movies.

"The cruise industry is unrolling new technology that is nothing short of amazing," says a CLIA spokesperson. "Most of today's cruise ships offer internet cafes along with bow-to-stern Wi-Fi and phone connectivity. With sophisticated networks and innovative platforms on the horizon, cruise travellers will soon find that their smartphones and mobile devices provide communications services at sea that are comparable to those they expect on land."

While on most liners there is a cost for Wi-Fi, the industry has responded to complaints about roaming costs and high connection fees on board. "Examples include Connect at Sea by Wireless Maritime Services for iPhone and Android users which is expected to drastically enhance wireless communications and reduce costs, as well as direct innovation by individual lines," says a CLIA spokesperson.

"Royal Caribbean has also introduced 3G data services by WMS, on its Oasis of the Seas and Allure of the Seas, allowing guests to use their mobile devices to access email, use apps and surf the web at increased connection speeds, and Regent Seven Seas Cruises offers up to 500 minutes of free Wi-Fi internet access to guests in concierge-level suites and higher."

Connecting with the passenger

While spectacular customised entertainment options on board continue to dazzle, in-cabin options also provide innovative choices. "Cruisers can expect to see exciting new games, shows and activities on board ships through partnerships that many of the lines are forming with big name brands," says a CLIA spokesperson. Examples include Crystal Cruises' partnership with the USC School of Cinematic Arts which brings "sophisticated movie-making education aboard, enabling guests to create iMovies on their iPads" and all events produced in Princess Cruises' TV studio, from culinary demos to art lectures and late night comedy, as they are beamed into stateroom TVs.

Overall, personalising the cruise experience for passengers improves the holiday experience on board and ultimately increases profit margins. "As with internet shopping, if the overall user experience is improved, it makes you more likely to buy," says Coulter, who adds that the technological advances allow cruise lines to build up a profile of their guests enabling an experience to be tailored to the individual.

"When on the big ships, some people are concerned that the personal sense is lost, but having these extra touches helps to make them feel more personalised. It helps them to give the personal experience that the smaller, luxury lines are able to deliver."

Duffy concludes: "Travellers want to feel special and the cruise industry is making its mark by constantly improving services and amenities that would surprise many who haven't cruised before. The cruise industry's high guest satisfaction rate is reflected in wowing passengers at every touch point and with every aspect of a cruise journey."