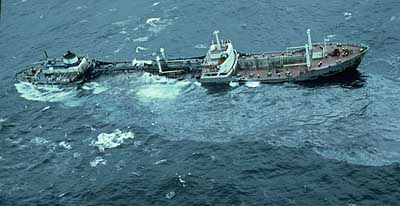 On 21 December, the Argo Merchant broke into two pieces, spilling all of its cargo and bunkers. The Coast Guard sank the bow of the ship with gunfire.

The prevailing wind and current carried the oil offshore and away from rich fishing grounds nearby. The spill was the largest in US history to that date.

Publicity surrounding the casualty resulted in Congress adopting the Port and Tanker Safety Act of 1978, giving the Coast Guard increased authority to inspect and regulate tank vessels, foreign and domestic, operating in US waters.