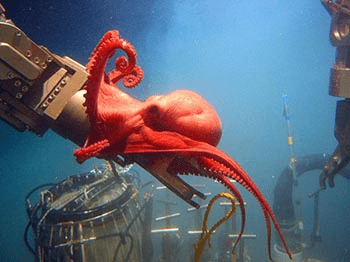 The US Bureau of Ocean Energy Management (BOEM) announces today the availability of a new two-volume study report, Investigations of Chemosynthetic Communities on the Lower Continental Slope of the Gulf of Mexico.

Researchers created photographic mosaics of several new animal communities that were discovered and deployed markers so these sites may be revisited in the future.This final report presents the results from a five-year field study funded by BOEM and the National Oceanic and Atmospheric Administration’s Office of Ocean Exploration and Research (NOAA/OER), which was sponsored by the National Oceanographic Partnership Program. The objectives of the study were to discover and characterize the sea floor communities that live in association with hydrocarbon seeps and on hard ground in the deep Gulf of Mexico below a depth of 1,000 meters (3,300 feet). U.S. Geological Survey scientists participated in a complementary biological/genetics study. The findings were used in this report and added to our understanding of these unique communities.

Researchers also discovered three new species of halacarids – a marine mite in the same class as spiders and more than five new genera of nematodes or round worms. They also discovered one of the largest-known mussel beds in the deep Gulf of Mexico.

“With continuing interest in oil and gas development in deeper Gulf of Mexico waters, it is imperative for BOEM and other stakeholders to know what forms of marine life inhabit those waters in order to safeguard them during energy operations,” said BOEM Acting Director Walter Cruickshank. “The incredible range of discoveries made during this study contributes greatly to our knowledge of the deep Gulf and enables long-term environmental monitoring as resource development takes place.”

Use of the manned submersible Alvin and the remotely operated vehicle Jason II provided by NOAA OER facilitated the geological, geochemical, microbiological and biological research. Scientists also left markers at these sites so they could be studied over the longer term to determine growth rates of some of the animals, monitor for visitation by mobile deep-sea fauna, and follow the fine scale changes in seepage patterns and community composition.