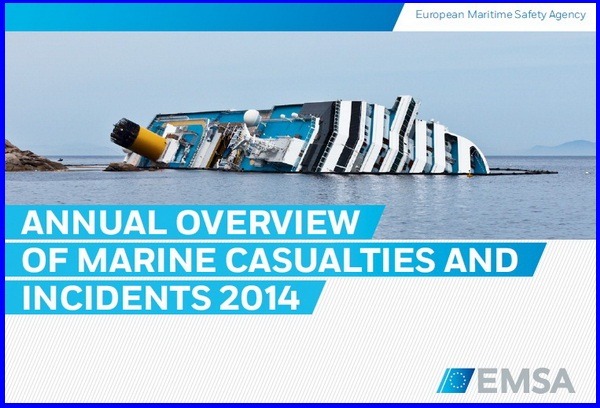 The European Maritime Safety Agency (EMSA) Annual Overview of Marine Casualties and Incidents consists in a high-level analysis of accidents reported by the EU Member States.

Following the entry into force of Directive 2009/18/EC1 establishing the fundamental principles governing the investigation of accidents in the maritime transport sector, EU Member States shall, among other obligations:

This EMSA-run platform relies on the competent national authorities to provide data. It is this data which forms the basis of the Annual Overview of Marine Casualties and Incidents.

In this publication, the terms “Europe” and “EU Member States” are considered to be the 28 Member States plus the EFTA Member States Iceland and Norway. The contribution of Croatia is limited as it joined the EU on 1 July 2013.

A total of 5,816 occurrences have been reported to EMCIP over its first three years in operation, 2011-2013, and have been used to produce this publication.

EU Member States are increasingly using EMCIP to report casualties and incidents. Comparison of the notifications in EMCIP against commercial sources that record accidents, suggested that approximately 3500 occurrences (ranging
from marine incidents at the lower end of the scale through to very serious accidents) could be expected to be notified annually.

It should be noted that the implementation of the reporting of marine casualties and incidents into EMCIP has been a gradual process. While the data can be used to shed light on certain aspects of maritime safety, it should not be used as an
indication of the full picture.

Over the three years under consideration, 228 persons lost their lives and 1952 were injured.