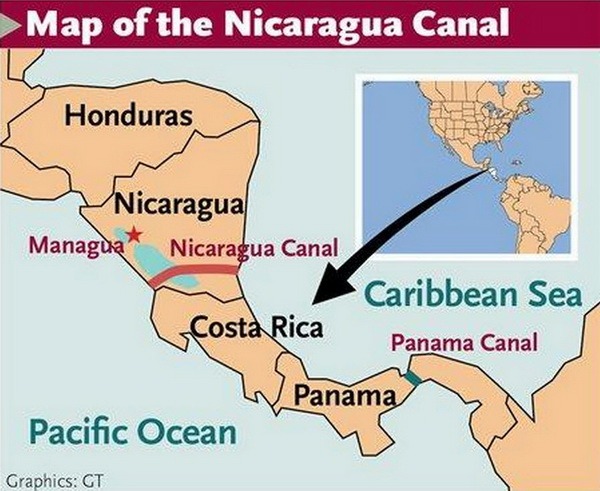 A Chinese-led consortium began construction work on a controversial canal across Nicaragua that backers say will rival the Panama Canal but which critics say is economically unfeasible—with its $50 billion price tag—and environmentally disastrous.

The ceremony was more show than substance—held to officially begin work on an access road aimed at paving the way for heavy machinery to begin digging out the proposed 172-mile waterway. A top aide to Nicaraguan President Daniel Ortega recently said the start of the canal work would be a “Christmas present” to the Nicaraguan people.

“This moment will surely be inscribed in history,” said Wang Jing, a little-known Chinese telecommunications executive who would oversee the project and round up the financing. Nicaraguans waved blue and white flags and shouted out “Daniel, Daniel,” after Mr. Ortega. Nicaraguan government officials have said the canal will be the engine that lifts the country out of poverty. Mr. Ortega has said the canal will make Nicaragua the richest country in Central America.

The canal is supposed to run from Brito, a hamlet on a beach on the country’s Pacific coast, cross Lake Nicaragua, the largest freshwater reservoir in Central America, and then cross mountains and rain forest before finishing at the mount of the Punta Gorda River in the Atlantic Ocean. The project also envisions building two deep-water ports, a free-trade zone, as well as an airport and luxury tourism developments complete with golf courses along the canal’s route.

But from its inception, the canal, which will be designed to giant transport ships that can handle up to 25,000 containers, has been controversial.

Many Nicaraguans have protested the terms of the contract, which grant Mr. Jing a 50-year renewable concession. Thousands of Nicaraguans on the canal’s route, fearful they will be forced out of their lands, have marched in protests across the country. “They never had a referendum, they consulted nobody. They did it because they could,” said Octavio Ortega, one of the leaders of the anticanal movement. “We are being colonized by the Chinese!”. Many economic analysts believe the canal is unfeasible and will never be built, or worse, could end up half built as funding runs out.

“It’s a gigantic white elephant,” said Jean-Paul Rodrigue, a transportation expert at Hofstra University. Neither the Nicaraguan government nor Mr. Jing’s Hong-Kong based HK Nicaragua Canal Development Investment Co., known as the HKND Group, has said where it expects to get the financing.

Canal spokesman Telémaco Talavera said the financial information will be known in due time. “The information will be made public,” said Mr. Talavera, declining to give any other details. “We have met with potential investors from all over the world.”

Building a canal through Nicaragua has been a national dream since before the first government contract was awarded for a canal in 1825. But all attempts to do so have come to naught. In 1902, Panama beat rival Nicaragua when a proponent of the Panama project sent U.S. senators a stamp showing Nicaragua’s Momotombo volcano spouting smoke. The spooked senators voted for Panama.

Mr. Rodrigue, the infrastructure expert, says he didn’t believe the canal would be able to compete with an expanded Panama Canal, whose new set of locks is expected to be operational by 2016 and will be able to handle ships carrying up to 12,000 containers. Neither does he expect Mr. Jing will be able to raise the financing. Indeed Mr. Rodrigue believes the canal project is really a cover to build extensive real-estate developments along its route.

“You sell the country a big dream, you get an open door and you score big with real-estate development,” he said. “The great majority of the project that has been shown by Chinese developers are real-estate projects. They seem to be using the canal as an excuse to sell real-estate projects, golf courses, and hotels.”

While Mr. Rodrigue doesn’t believe the canal will be built, he is more optimistic that new ports, especially on Nicaragua’s Pacific coast, as well as an airport may be constructed as a result of the canal project. Environmental experts fear the canal will be an environmental disaster which could destroy the Lake Nicaragua, the largest source of fresh water in the region. Mr. Talavera said studies made by HKND show the construction of the canal won’t harm the lake. But the consortium hasn't yet released any environmental impact study.

Critics of the canal say both the company and the Nicaraguan government have been secretive about the project. Pedro Álvarez, chair of the civil and environmental engineering department at Rice University, said no company representatives went to a meeting held recently by leading scientists to discuss potential issues with Lake Nicaragua.

Mr. Álvarez said that a canal through the lake would require constant dredging which could turn the canal into a “dead zone” killing off many fish species. Spills are another concern, as is the ability of maintaining water levels as global warning worsens, he said. “There are lots of technical and scientific issues one has to think of to avoid unintended consequences,” he said. “They have not completed or released an environmental study and that goes against best international practices.”

Mr. Talavera said the environmental scientists’ doubts are based on theories, while studies conducted for the company have “hundreds of thousands of facts” which are allowing it to take preventive measures to assure the environmental safety of the lake and the canal itself.