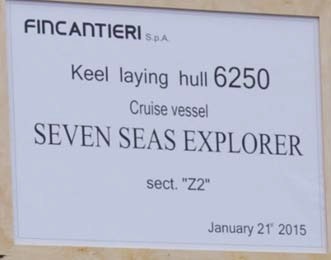 The Fincantieri shipyard in Genoa, Italy held a dockside ceremony as the first building block of luxury line Regent Seven Seas' 750-passenger SEVEN SEAS EXPLORER was lowered into place. Scheduled to debut in July 2016, the 56,000-ton vessel will have the highest ratio of space to passengers in the history of cruising and feature some of the most opulent suites at sea. At $450 million, it'll be the most expensive luxury ship everThe ceremony – a shipbuilding custom that dates back hundreds of years – traditionally has signified the official start of construction of a seagoing vessel and is a major milestone "With construction beginning in earnest today, we took a major step closer to realizing our vision to provide our guests with a vessel that will be hailed as the most luxurious ship ever built," Regent president and COO Jason Montague said at the event.During the ceremony, a black Rolls Royce Phantom delivered three symbolic coins: A rare 1921 U.S. silver coin known as the Peace Dollar, symbolizing the safe passage of the Explorer; a 1959 silver Italian Lire, representing the year the Fincantieri shipyard was established; and a commemorative coin specially minted for the occasion. Monague and two other Regent executives then welded the coins onto the first building block. The SEVEN SEAS EXPLORER cruise ship's 'Regent Suite' will come with 3,875 square feet of space and a $65,178 price tag when it launches. The Explorer will be Regent's first new ship since the debut of the line's 700-passenger Seven Seas Voyager and Seven Seas Mariner more than a decade ago. Like those vessels, the SEVEN SEAS EXPLORER will be an all-suite ship. Only a handful of luxury lines, including Hapag-Lloyd Cruises and Silversea Cruises, offer all-suite ships. Reservations for the Explorer's maiden voyage and inaugural season opened to members of Regent's Seven Seas Society. The general public can begin making bookings on Feb. 4.