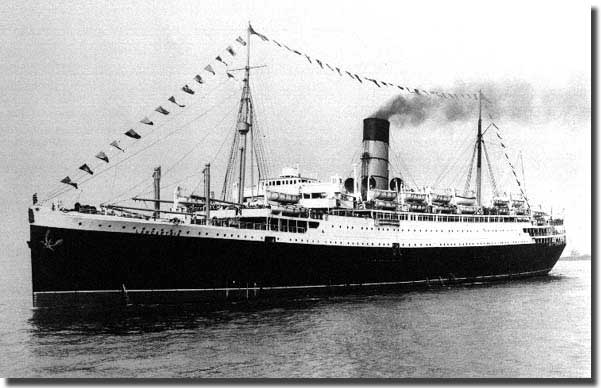 This British ocean liner was commandeered by the government during World War II. It was sunk on June 17th, 1940, resulting in the loss of over 4,000 lives, possibly many more. This is considered to be the worst loss of life in the sinking of a single British ship, and the bloodiest single engagement for UK forces (in terms of lives lost) in all of WW2. This disaster claimed more lives than the combined losses of the Titanic and Lusitania.

After a short overhaul, she left Liverpool on 14 June under Captain Rudolph Sharp (born 27 October 1885) and arrived in the mouth of the Loire estuary on 16 June. She anchored 11 miles (18 km) south-west of St. Nazaire. By the mid-afternoon of 17 June, she had embarked an unknown number (estimates range from 4,000 up to 9,000), of civilian refugees (including embassy staff, employees of Fairey Aviation of Belgium), line-of-communication troops (such as Pioneer and RASC soldiers) and RAF personnel. The ship's official capacity was 2,200 including the 375-man crew. Captain Sharp had been instructed by the Royal Navy to "load as many men as possible without regard to the limits set down under international law".

At 1350 hrs, during an air-raid, the nearby Oronsay, a 20,000-ton Orient Liner, was hit on the bridge by a German bomb. Lancastria was free to depart and the captain of the British destroyer HMS Havelock advised her to do so, but without a destroyer escort against possible submarine attack, Sharp decided to wait.

A fresh air raid began before 4 p.m. Lancastria was bombed at 1548 hrs by Junkers Ju 88 aircraft from II. Gruppe/Kampfgeschwader 30. Three direct hits caused the ship to list first to starboard then to port; she rolled over and sank within twenty minutes. Over 1,400 tons of fuel oil leaked into the sea and was set partially on fire, possibly by strafing. Many drowned, were choked by the oil, or were shot by the strafing German aircraft. Survivors were taken aboard other evacuation vessels, the trawler Cambridgeshire rescuing 900. There were 2,477 survivors, of whom about 100 were still alive in 2011. Many families of the dead knew only that they died with the British Expeditionary Force (BEF); the death toll accounted for roughly a third of the total losses of the BEF in France. She sank around 5 nmi (9.3 km) south of Chémoulin Point in the Charpentier roads, around 9 nmi (17 km) from St. Nazaire. The Lancastria Association lists 1,738 deaths.Other sources believe the number to be over 4,000 lives, possibly many more. 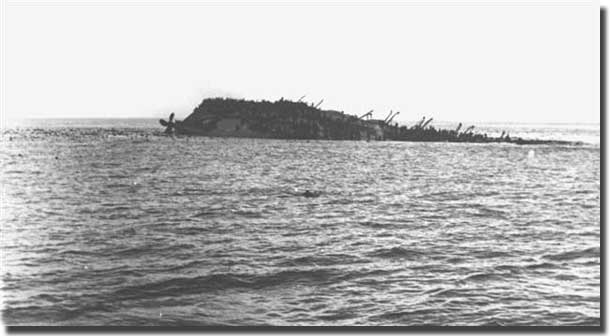 The immense loss of life was such that the British government suppressed news of the disaster through the D-Notice system, but the story was broken in the United States by The New York Times and in Britain byThe Scotsman on 26 July, more than five weeks after the incident. Other British newspapers then covered the story, including the Daily Herald (also on 26 July), which carried the story on its front page, and Sunday Express on 4 August; the latter included a photograph of the capsized ship with her upturned hull lined with men under the headline "Last Moments of the Greatest Sea Tragedy of All Time", but the full story of theLancastria never came out. Due to the government-ordered cover-up, survivors and the crews of the ships that had gone to the aid of Lancastria did not discuss the disaster at the time due to the fear of court martial. The British Government has refused to make the site a war grave under the Protection of Military Remains Act 1986 although documents obtained under Freedom of information legislation (FOIA) show that it could be done. Early in the 21st century the French Government placed an exclusion zone around the wreck site. In July 2007 another request for documents held by the Ministry of Defence related to the sinking was rejected by the British Government. The Lancastria Association of Scotland made a further request in 2009. They were told that release under the FOIA would not be given because of several exemptions.