More
Facebook
Linkedin
Twitter
Home History Flashback in history: The Sinking of the Princess of the Stars, 21... 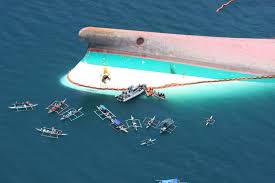 There were storm warnings, but the ferry sailed despite them. Seven stories high and nearly 24,000 tons, she was rated to handle Storm Condition 2 winds on the 20 hour journey from Manila to Cebu, the major city in the southern part of the Philippines, 355 miles away as the crow flies. On board were 865 people, 724 passengers and 141 crew, about 50 of them children, as well as a dangerous cargo.

On route, the ship encountered the fierce winds and massive waves of Typhoon Fengshen, which had been sweeping through the region but had not been expected to cross the ferry’s path. Typhoons are notoriously erratic, however, and in due course Fengshen’s mountainous seas swamped and then capsized the ship as she ran aground, tearing a large gash in her hull in the process, just off Sibuyan Island in Romblon Province, about halfway to her destination.

No explanation has yet revealed why Captain Florencio Marimon — now among the missing — sailed that evening despite the approaching typhoon. Sulpicio Lines Inc. (SLI), the shipowners, have nevertheless sued the Philippine Atmospheric, Geophysical and Astronomical Services Administration (PAGASA) and two of its officials for “gross negligence and incompetence” in forecasting the path of Typhoon Fengshen from June 20 to June 21, which it blamed for the sinking of its ship.

However, typhoon warnings were in effect at the time of sailing, and one has to question whether SLI’s claim is little more than an attempt to dodge responsibility for the tragedy. (We will get to their other attempts to shift responsibility in a moment.)

Beyond the ill-advised and arguably reckless departure of the Princess of the Stars (Manila Archbishop Gaudencio Cardinal Rosales called it “the act of a stupid person,” and even Philippine’s President Gloria Macapagal Arrooyo stated that the ferry should never have sailed), the state of the safety systems on board the vessel were far from ideal. Many of the life vests were outmoded, known to run risks of face-down flotation. Furthermore, the ship’s safety video did not instruct passengers in the proper procedure to jump into the sea (this perilous act requires wrapping your arms tightly around the life vest to avoid neck injuries as the vest’s buoyancy forces it violently upward as you hit the water). In addition, passengers were not warned to stay clear of the dangerous steel accommodation ladders welded to the side of the ship (used to provide access to small boats) that could seriously injure or kill careless jumpers or destroy inflatable life rafts as they are deployed.

Survivor reports also revealed that life boats were tightly lashed to the deck, making it difficult for passengers and crew to deploy them in the twenty minutes after the storm hit before the ship capsized. Even then, a number of the life boats that were launched were swamped by the rough seas, and hundreds of passengers were still on board or below decks when the ferry capsized.

Still, all this might be explained away if not for the long history of such accidents in the Philippines, many of them involving Sulpicio vessels. The worst by far was the collision of the Dona Paz with a tanker in 1987 that killed 4,300 in the worst peacetime maritime disaster. Other Sulpicio accidents include the Dona Marilyn in 1988, and the Princess of the Orient in 1998. In total, Sulpicio has had 45 sea mishaps in the past 28 years according to retired rear admiral Benjamin Mata. (Mata — one of two such resignations by high ranking former naval officers — withdrew from his role in the Board of Marine Inquiry’s investigation of the incident after being accused of bias by Sulpicio.)

In spite of the numerous maritime accidents in the Philippines, not a single captain or shipowner has been held criminally liable. In addition, Sulpicio, uniquely, is the only passenger carrier that was dropped from membership in the Protection & Indemnity Club, a cooperative insurance venture that would otherwise have provided adequate coverage. According to retired Rear Admiral Amado Romillo (the second former navy officer accused by the shipowner of bias) “substandard management and maintenance” prompted Sulpicio’s ousting from the club.

Liability and insurance are particularly important because in addition to its passengers the Princess of the Stars was carrying a highly dangerous cargo for Del Monte Philippines, a subsidiary of the global food giant. Aboard ship was a 40 foot container carrying the highly toxic pesticide endosulfan, a 10 foot container carrying four other pesticides, carbofuran, propineb, metamidophos and niclosamide, and a large quantity of bunker fuel. Endosulfan is not only deadly, but it prone to accumulate in the body, and is banned in the EU. In fact, will be banned for use in the Philippines starting in September 2008, although it is still used in the United States.

In the wake of the accident (and after some wrangling over bank guarantees) SLI has signed a contract with Titan Salvage of Ft. Lauderdale, Florida, to remove the dangerous cargo from the capsized vessel, a step that must precede the recovery of the trapped bodies and the ship itself. However, toxicity has vastly complicated the recovery process, and runs the risk of turning the human tragedy into a massive environmental disaster as well. The United Nations, who responded to a Philippine call for assistance, has recommended extensive monitoring and careful protocols to avoid exposing salvage crews — not to mention the nearby population of Subuyan Island — to risk.

In a civil legal action, Sulpicio has moved to transfer the liability for the cleanup to Del Monte, claiming that they had not informed the shipping line of the toxic nature of its pesticide cargo. Del Monte refutes this claim.

Rico Cruz, terminal manager of the International Container Terminal Services (ICTS) of the Philippines contradicted Sulpicio’s cargo operations officer Tomas Gutierrez Jr.’s statement that the endosulfan cargo had not been properly labeled. “When it arrived into our yard, its official classification is DG6 meaning poisonous,” Cruz said during the Philippine Board of Marine Inquiry (BMI) into the sinking. He added that he had taken pictures of the shipment. However, SLI has moved to prevent ICTS from testifying during the government inquiry on the grounds that it would bias the civil law suits currently underway.

As for the victims and their families, MARINA, the Maritime Industry Authority of the Philippines, has only required that Sulpicio pay P200,000 per fatality (about $4,500) and P20,000 ($450) to each survivor. This works out to less than half of the $7.55 million cargo salvage cost.