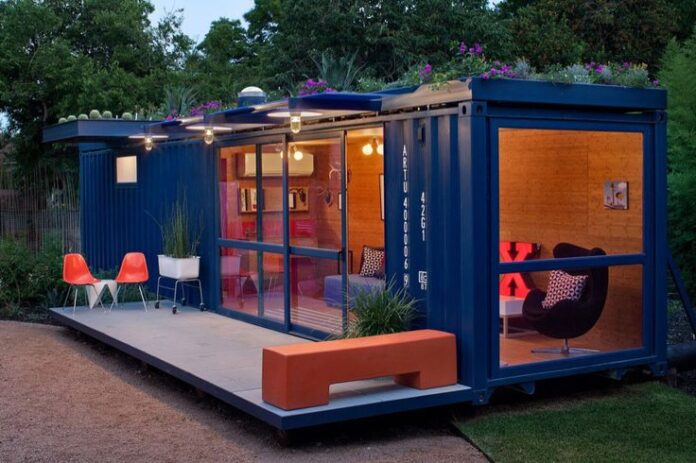 Strong, stackable and mobile, the potential uses for out-of-service shipping containers are nearly unlimited—and also not well known. Maersk Line Container Sales, a new start-up company within Maersk Line, is betting on customers’ imagination, and big growth. Brad Berman bought his first used shipping container in June 2014. It was dented and scratched, the paint was falling off and there were bits of rust scattered over the surface but its looks meant nothing to him. The Cape Town native and real estate developer was looking at the start of his new business. Today, Berman is the founder of Berman-Kalil Housing Concepts, a Cape Town-based company utilising old shipping containers to build a variety of structures but primarily inexpensive high-quality sustainable housing. In South Africa, a nation with high unemployment and an abundance of informal settlement-type housing, Berman hopes to make a difference, and a profit.

“The potential number of uses for containers is so big in a place like South Africa. There are so many settlements in my country that could be replaced by these container homes. But the combination of quality, durability and price make containers ideal for housing but also clinics, schools, stores, almost any structure,” he says. A market that doesn’t know itself Berman is one of many new customers for Maersk Line Container Sales, a new business within Maersk Line established in August 2014 to better target the market for used shipping containers. Previously, third parties sold Maersk Line’s used containers on the shipping line’s behalf, managing the customer relationships and taking a large chunk of the profit in exchange. Now that Maersk Line has direct control of the business, the opportunities and challenges are lining up. “It’s a fascinating market because people are all still exploring the variety of uses for shipping containers,” says Rune Sorensen, Managing Director of Maersk Line Container Sales. “You could say the market doesn’t know itself, so one of our tasks is to help potential customers imagine how they can use our containers.” The business starts from a strong position: Maersk Line has roughly 2.5 million containers in circulation globally and the world’s largest vessel network to distribute them where they are needed. As of January 2015, approximately 80,000 containers were available for sale through Maersk Line Container Sales. All of them have fulfilled 15-18 years of service—Maersk Line’s cut-off for carrying cargo—or are too damaged to be worth repairing and put back into service. “Maersk’s presence almost all over Africa means that as we expand the business we don’t have to worry about supply. That is important, that we can get containers no matter where we are next,” says Berman. Growth markets “We are not selling beautiful, shiny containers.

Maersk Line’s containers are worth much more to the business when they are full of cargo,” says Sorensen. The distinctive blue Maersk branding is nowhere to be seen on these containers nor are there any ocean transport services on offer. “What we are selling is at best a plain vanilla container. It is still as strong as it ever was and with basic care it will last for decades, but it often needs some repair which is why we’re focusing mainly on those markets where they can be repaired for lower cost,” says Sorensen. These markets are South America, Africa and the Middle East and for the last six months Sorensen has been building a sales team in those areas to grow the business.In Kenya, Jacob Bolo is leading the effort as Head of Sales for Maersk Line East Africa. Besides a few large traders that are regular customers, most of his time is spent trying to get to know the retail ‘end users’ of shipping containers which can be difficult if they hire freight forwarders to handle their shipping business.“The opportunity in Kenya and East Africa is strong, also in the hinterlands like Uganda and Sudan where there are consistent container shortages,” says Bolo. “We haven’t been in the market long but already I’d say the market knowledge of Maersk Line Container Sales is gradually increasing, there are more customers asking about us,” he says.