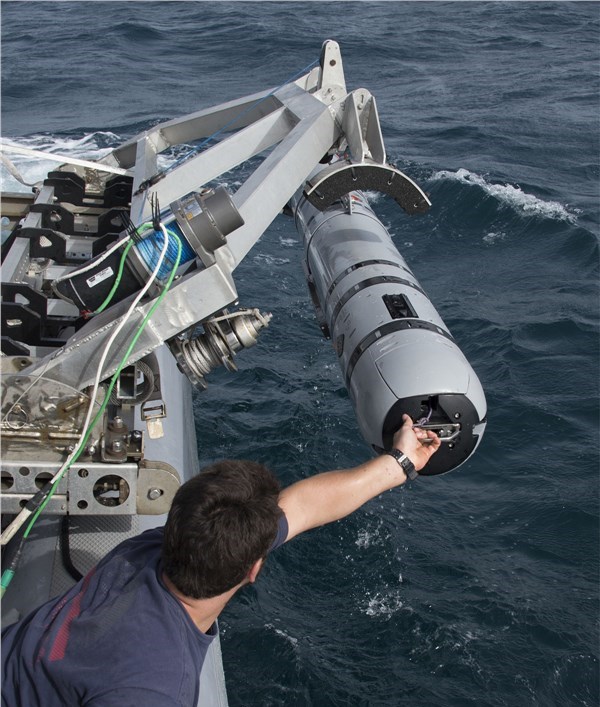 The Navy uses UUVs for many types of missions, including the location and identification of underwater threats such as mines, ocean floor mapping, and optimizing remote sensing platforms. The ability to use wireless technology to charge UUV batteries while underwater may significantly decrease time between missions, improving overall utility.

"Underwater data and energy transfer are expected to multiply the effectiveness of Navy-operated UUVs and other unmanned platforms by providing a vehicle-agnostic method for autonomous underwater energy charging," said Alex Askari, Naval Surface Warfare Center, Carderock Division (NSWCCD) technical lead. This technology can be used on many different types of vehicles.

"We want to recharge a battery underwater through wireless technology, and we want to know the batteries charge to the highest fidelity," Mayer Nelson, NSWCCD technical project manager said. The NSWCCD demonstration was a collaborative effort as Carderock hosted teams from NUWC DIVNPT and SSC PAC.

"The NUWC team was on-hand to simulate the full capabilities of the NUWC-developed Mid-sized Autonomous Research Vehicle (MARV) UUV, as well as to provide assistance with testing," Joseph Curran, NSWCCD integration lead said.

The MARV is 16.5 feet long and just slightly more than one foot in diameter for testing different UUV programs and technologies.

Carderock Division's developed technology enables power transmission between underwater systems, such as UUVs. During the main demonstration on July 3, the team was successful in transferring power wirelessly from an underwater docking station to a MARV UUV section, and ultimately to the UUV's battery, which was charged at 2 kilowatts while submerged, according to Nelson.

"We tested a Carderock-developed algorithm and pulled in data from the actual battery; then ran voltage, current and temperature data through the data acquisition system," Knauff said.

During underwater energy transfer, this program was run using data that had been transferred wirelessly underwater using SSC PAC's underwater optical communications system and allowed an enhanced estimation of the charge on the battery through the SOC program.