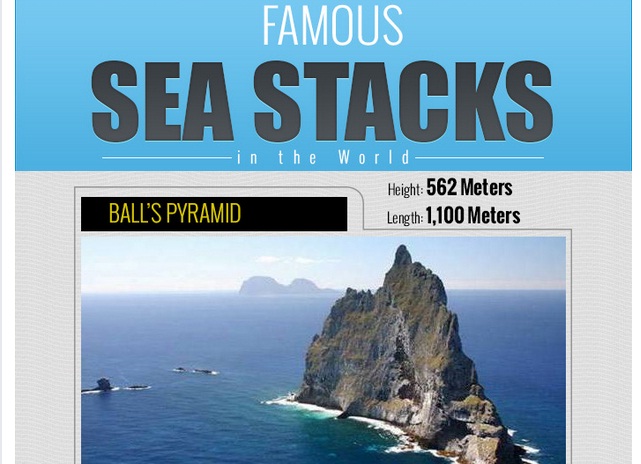 Sea stack are magnificent looking vertical rock formations which are formed naturally and stand in the sea. These sea stacks are formed by water and wind and their formation process begins when the sea tends to create different sized cracks in the headland. Due to this collapse is caused at the later stages and thus freestanding sea stacks are formed.

But not all sea stacks are as strong or are very tall. Some tend to collapse early while some stay on for years.

The sea stacks which have stood the test of time have become famous and one example of such a stack is Ball’s Pyramid in Australia. This sea stack has a height of 562 meters and was discovered in the year 1965.

Another vertical rock formation which is famous is the Kicker Rock of 152 meters of height. This sea stack is located in Ecuador.

Some other famous sea stacks are Old man of Stoer, Dun Briste, Lange Anna, the twelve apostles and Sail rock.