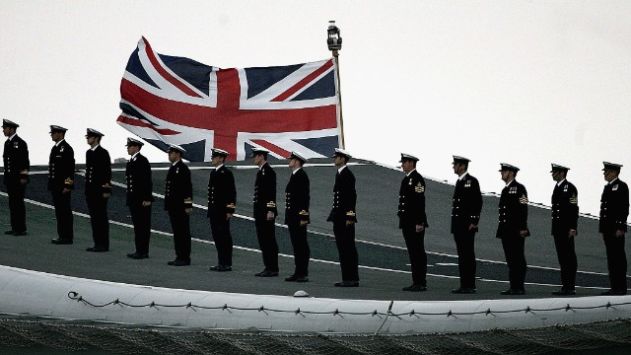 PORTSMOUTH, UNITED KINGDOM - JUNE 28: Sailors on board the aircraft carrier HMS Illustrious wait on the flight deck to salute during The International Fleet Review on June 28, 2005 in Portsmouth, England. The Review forms part of the Trafalgar 200 celebrations marking the 200th anniversary of the Battle of Trafalgar at which Lord Nelson commanded the Royal Navy in a famous victory over the French. (Photo by Peter Macdiarmid/Getty Images)

Britain’s navy could be using a fleet of unmanned surface and underwater vessels and small 3D-printed ships within 15 years, according to a report from the former government defense-research laboratory, Qinetiq Group Plc.

Three-dimensional printing of craft up to 15-meters (50 feet) long and formed from layers of metal, plastic powder or graphene would permit cheaper and quicker production, according to the Global Marine Technology Trends 2030 report, published Monday. Navies could also use the process to print mission-critical items at sea, allowing them to spend less time in dock.

Other technologies could help integrate ships and their crew, with Wi-Fi-linked contact lenses projecting information to users and exoskeletons allowing engineers to shift objects such as missiles more easily. Similar gear is being developed for commercial shipping, according to the report, co-authored by the University of Southampton and Lloyd’s Register.

“What we really need to be doing is more experimentation, finding out what’s possible,” Iain Kennedy, Qinetiq’s head of maritime business development, said in an interview.

The Royal Navy is already evaluating unmanned sub-surface torpedo-shaped vessels for use in locating and destroying mines, Kennedy said. Qinetiq is also testing communications between unmanned surface ships, underwater vessels and aerial vehicles that could one day undertake autonomous missions after being released from a manned naval vessel he said.

Inmarsat Plc said Tuesday it would provide satellite links to a 6.6 million-euro ($7.4 million) project led by Rolls-Royce Holdings Plc for the development of ships controlled from shore.

Britain is collecting submissions ahead of a strategic defense and security review as the government seeks to shave 20 billion pounds from public spending over the next four years.

One key consideration is that new-build vessels such as the BAE Systems Plc Type 45 Destroyer and Type 26 frigate be more compatible with modular upgrades so that the latest “plug and play” equipment can be added more easily, Kennedy said.