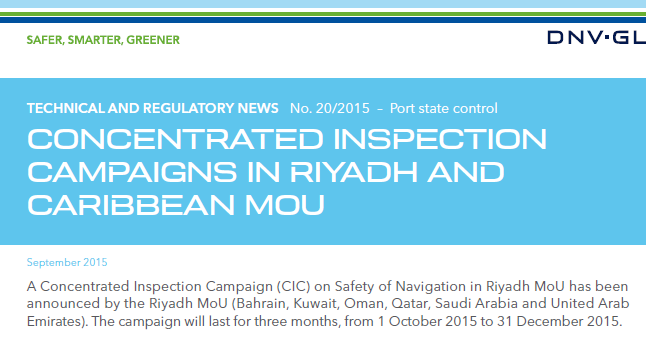 A Concentrated Inspection Campaign (CIC) on Safety of Navigation in Riyadh MoU has been announced by the Riyadh MoU (Bahrain, Kuwait, Oman, Qatar, Saudi Arabia and United Arab Emirates). The campaign will last for three months, from 1 October 2015 to 31 December 2015.

During the CIC, Port State Control Officers (PSCO) will go through a questionnaire with 12 selected items to establish if a vessel is in compliance with the requirements of the SOLAS V regulation.

Some areas of concern are AIS, VDR, and to ensure that watch keeping officers are familiar with this equipment.

Depending on the nature of the deficiencies found during the CIC, the PSCO will either register a deficiency with a given due date for rectification or detain the vessel if serious deficiencies have been identified.

The press release from Riyadh MoU with the questionnaire of 12 selected items is attached to the PDF for your guidance (Annex I).

The 2015 CIC in Caribbean MoU focuses on Safety of Navigation and Hours of Rest. The campaign started on 1 September 2015 and will last until 30 November 2015. As for the Riyadh MoU, the purpose of the campaign is to ensure compliance with Chapter V: Safety of Navigation of the Annex to SOLAS and the requirements related to hours of rest as specified in the amended STCW 78 Convention.

The aim of the CIC is to establish that:

To ensure compliance with SOLAS V and STCW part A C VIII part 4-1, the PSC officers will use a questionnaire listing a number of items to be covered during the CIC. Depending on the nature of the deficiencies, the actions from PSC officers may range from recording a deficiency that has to be rectified within a certain period of time to detaining a vessel with serious deficiencies until they have been rectified.

The press release from CMOU is attached to the PDF for your guidance (Annex II) and can also be found on the Caribbean MoU website.

DNVGL has issued the below informational leaflet, which contains guidance and relevant checklists. click image to download.