Greenpeace calls on the government of Japan to cancel the whaling fleet heading to the Southern Ocean under the guise of “research whaling”, and condemned the expedition as both unnecessary and in violation of the findings of the International Court of Justice (ICJ).

The Japanese government released a statement announcing the fleet would depart for the Antarctic today.“It is completely unacceptable for the Japanese government to ignore the International Court of Justice. It’s time to cut the charade. This is not ‘scientific research', this is straight up commercial whaling, ” said Junichi Sato, Executive Director of Greenpeace Japan. “In 2014 the fleet was able to conduct scientific research that didn’t cause any whales to be killed, and there is no reason that this should not be the case this year. 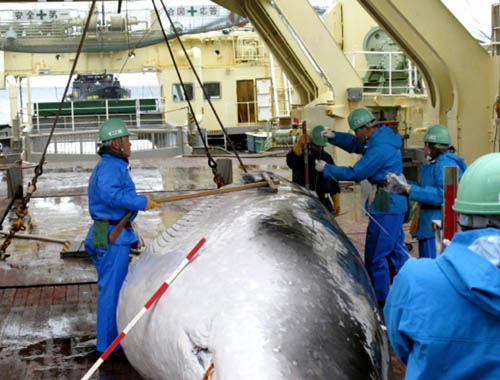 Greenpeace Japan and 15 other Japanese NGOs are demanding that the government of Japan reverse this decision, and abide by international law.”In 2014, the ICJ ruled that Japan’s research whaling program was not, in fact, designed for scientific research and refused the government a permit to go ahead. Japan, however, proposed a new program called “NEWREP-A” which will target 3,996 minke whales over next 12 years.In May 2015, the Scientific Committee of the International Whaling Commission stated that the new programme “contained insufficient information” and demanded that the Japanese government provide more information to prove the new programme is serving scientific purposes.

However, in October the Japanese government announced to the United Nations that they will not accept the jurisdiction of the ICJ, and said that that they will not accept any finding or lawsuit pertaining to any dispute over use of ocean resources. This is a significant reversal of the Japanese government’s previous position, which had accepted and endorsed the need to abide by international law and legal findings.