The Joint War Committee has recently reviewed the Listed Areas, last altered 12th June 2013, and has agreed the following changes which are incorporated in the new list as attached.

Nigeria
The recent NNGC ban on 113 tankers remains unexplained. Clearly all the named vessels are at risk of detention and Intertanko have demanded to know the basis for it and also how to get the ban lifted/removed.
Hormuz
There have been recent tensions in Hormuz as a by-product of the enmity between Iran and Saudi Arabia, as the Saudis believe Iran is trying to control strategic waterways. Whilst a deal has been done around the US Iranian sanctions, implementation in practice is months away (2016) so underwriters will need to maintain their current procedures and vigilance.
Situation in Yemen
Hostilities ongoing in many areas - accurate details not available. Iran and Saudi Arabia are effectively in a proxy conflict.Foreign vessels are currently forbidden from entering Yemeni waters. Yemen does not have an effective navy of their own, so the Egyptian and Saudi navies have been mandated to enforce this. There are entry procedures for vessels to enter Hodeidah or Saleef port - a completed form must be sent to the Yemen Ministry of Transport, now based in Jeddah. The system works but needs much effort from concerned parties - there may be some vessels which the coalition will decline to authorise.The JWC is keeping the region under close review. The JWC's advisers, Aegis DS, are very happy to take calls from members on specific issues. Lloyd's Agents office in Aden is in insurgent hands and thus closed.Reports from Lloyd's Agent, Hodeidah
The blockade on commercial shipping continues - ports are handling some vessels although permission has to be obtained. Hodeidah is under Houthi control and has been for some months.Oil supplies are being disrupted and without fuel to operate machinery, hospitals will run out of water.

Aden has suffered heavy fighting and that has meant there being no water or electricity in many areas. In addition there have been Saudi coalition airstrikes on military targets.

Piracy
The area of the Indian Ocean where ships need to on their guard remains vast. The military assessment is that although no major vessel has been seized for some time, the pirate infrastructure remains in place, and their ability to take ships is undiminished. The JWC Listed Area is currently similar to but not the same as the UKMTO and BMP areas but in part serves a similar purpose, to alert ships to the potential dangers. The US Executive Order effectively requires insurers to contact OFAC should they be involved in a piracy case.Pirate activity is rising in the Singapore Strait and a number of oil cargo seizures have occurred this year in the South China Sea. Oil cargo seizures are also a problem in the Gulf of Guinea. 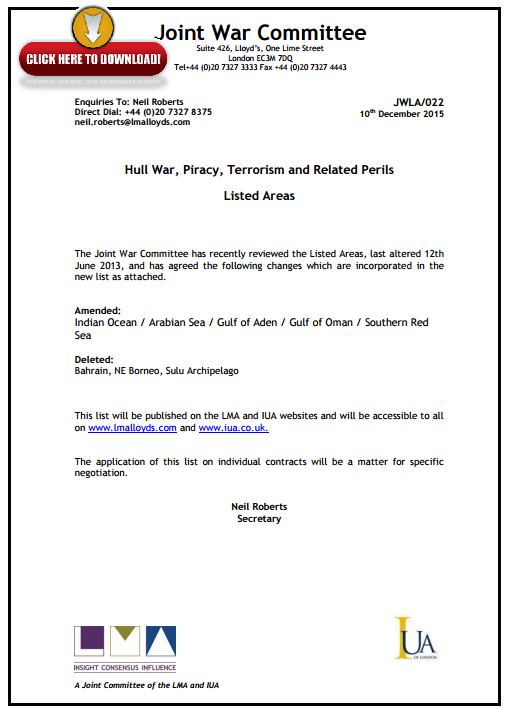