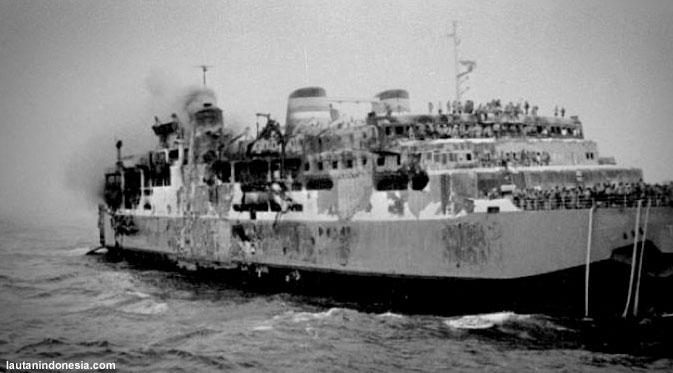 Fire broke out on the Indonesian car ferry TampoMas II off Kalimantan. The official death toll was 431, but with many passengers unregistered or traveling without tickets, the final figure was never known.

The ship carried dozens of motor vehicles, including a SAKAI steam roller, Vespa scooters, etc., which were parked in the car deck. The manifest mentioned 200 motor cars, 1055 registered passengers and 82 crew members on board. The estimated total passengers, including stowaways, was 1442.

Around 20:00 on January 25, in stormy weather, some parts of the engine experienced fuel leaks, and cigarette butts coming down from the vents ignited the leaking fuel. The crews saw the fire and tried to snuff it out using portable fire extinguishers, but failed. The fire grew larger in the engine compartment because of the open deck doors. It caused a power cutoff for two hours, and the emergency generator failed and any effort to extinguish the fire was halted because it was deemed impossible. The fuel that was still in every vehicle caused the fire to spread and burned up all the decks quickly. Thirty minutes after the fire started, the passengers were ordered to go to the upper deck and board the lifeboats. However, the evacuation process went slowly because there was only one door to the upper deck. Once they get to the upper decks, none of the crew nor the ship's officers directed them to the lifeboats. Some of the crew members even selfishly lowered the lifeboats for themselves. There were only six lifeboats, each with a capacity of only 50 people. Some passengers desperately dived into the sea, and some frantically waited for rescue.

The first ship to conduct a rescue mission was the KM Sangihe, with Captain Agus K. Sumirat as the skipper. Sumirat was Abdul Rivai's classmate in the class of 1959 when they were studying at Academy Ilmu Pelayaran (Maritime Academy). Sangihe was travelling from Pare-pare to Surabaya for engine repair. Sangihe's first deck officer, J. Bilalu, wasthe first to see a puff of smoke to the west and thought the smoke was coming from Pertamina's offshore oil rig. Sangihe's wireless operator, Abu Akbar, sent an SOS message at 08:15. KM Ilmamui joined the rescue effort at 21:00, followed four hours later by the tanker Palace VI and other ships, including Adhiguna Karunia and PT. Porodisa Line's KM Sengata.

In the morning of January 26, the Java Sea was hit by torrential rain. The fire began to spread to the engine room, where there was unisolated fuel. As a result, in the morning of January 27, there was an explosion in the engine room which created an entrance for the sea water to fill the compartments. The generator and the propeller room filled with seawater, which resulted in the ship having a 45° list.

Captain Abdul Rival was the last to leave the ship, he sent a message to the skipper of Sangihe, "Please send me water and food, because I am going to stay on the ship until the last minute". The message was conveyed through Bakaila, a crew member who successfully crossed over to Sangihe. But the request was not fulfilled by Sumirat.

Rescuers estimated that 431 people were killed (143 bodies were found and 288 people were lost with the ship), while 753 people were rescued. Other sources put the number of victims as much larger, with up to 666 people killed. Of note, Palace VI managed to save 144 Tampomas passengers and discovered four bodies, while Sengata saved 169 people and discovered two bodies, while another ship, KM Sonne discovered 29 dead bodies, including captain Abdul Rival.

The wireless operator, Odang Kusdinar, survived, he was found with 62 passengers in a lifeboat near Duang Duang Island, 240 km east of where Tampomas sank, on Friday, January 30, 1981 at 05:00.