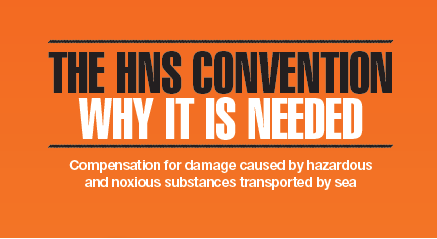 In 1984, IMO convened a conference to consider a new instrument dealing with compensation for accidents involving hazardous and noxious substances (HNS) but the issue proved to be so complex that the attempt had to be abandoned. Because of the heavy workload of the Legal Committee, it was not until 1996 that the matter could be considered again. The International Convention on Liability and Compensation for Damage in Connection with the Carriage of Hazardous and Noxious Substances (HNS) by Sea, adopted in London in May 1996 by IMO.

The Correspondence Group has also produced an overview to the HNS Convention, agreed by the Legal Committee at its 84th session, which provides straightforward but fundamental information on the key issues that fall within the scope of the Convention.

However, by 2009, the HNS Convention had still not entered into force, due to an insufficient number of ratifications. A second International Conference, held in April 2010, adopted a Protocol to the HNS Convention (2010 HNS Protocol), that was designed to address practical problems that had prevented many States from ratifying the original Convention. ​