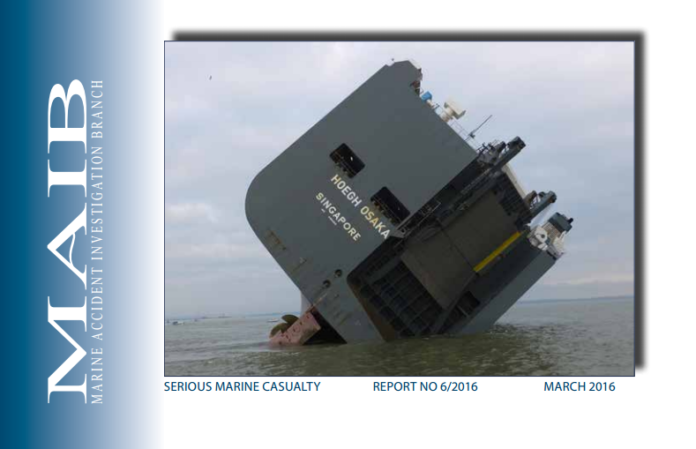 The report into MAIB’s investigation of the listing, flooding and grounding of pure car and truck carrier Hoegh Osaka on the Bramble Bank, The Solent on 3 January 2015 is now published. Hoegh Osaka had sailed from the port of Southampton, bound for Bremerhaven, at 2006. A pilot was embarked and there were 24 crew on board. Following the accident, all crew were successfully evacuated from the ship or recovered from the surrounding waters.

There was no pollution. A major salvage operation successfully refloated Hoegh Osaka and it was subsequently taken to a safe berth in Southampton on 22 January. Stability modelling and analysis following the accident show that Hoegh Osaka heeled heavily to starboard while turning as a result of having departed port with inadequate stability. Cargo distribution was such that the upper vehicle decks were full while the lower vehicle decks were lightly loaded. Hoegh Osaka was low on bunker fuel oil, which was stored low down in the ship. With no additional ballast having been loaded prior to departure, the ship’s overall centre of gravity was relatively high. The analysis also concluded that it was most likely that the cargo shifted due to the ship’s excessive list and was not causal to the accident.

Hoegh Osaka’s itinerary had changed from its routine loading rotation between three north-west European ports. The actual cargo weight and stowage were significantly different from the final cargo tally supplied to the ship. Ballast tank quantities were estimated on board and differed significantly from actual tank levels. Cargo unit vertical centres of gravity were routinely not allowed for in the ship’s calculated stability condition. These factors all combined to result in the ship leaving Southampton with insufficient stability for the voyage.

A key finding of the MAIB investigation is that no departure stability calculation had been carried out on completion of cargo operations and before Hoegh Osaka sailed. Witness and anecdotal evidence suggests that this practice extends to the car carrier sector in general. The fundamental requirements for establishing before departure that a ship has a suitable margin of stability for the intended voyage had been eroded on board Hoegh Osakasuch that unsafe practices had become the norm.

In his statement to the media, Steve Clinch, The Chief Inspector of Marine Accidents stated:

The MAIB’s investigation found that Hoegh Osaka’s stability did not meet the minimum international requirements for ships proceeding to sea. The cargo loading plan had not been adjusted for a change to the ship’s usual journey pattern and the number of vehicles due to be loaded according to the pre stowage plan was significantly different from than that of the final tally. The estimated weight of cargo was also less than the actual weight. Crucially, the assumed distribution of ballast on board, bore no resemblance to reality, which resulted in the ship leaving Southampton with a higher centre of gravity than normal.

This accident is a stark reminder of what can happen when shortcuts are taken in the interest of expediency. It is therefore imperative that working practices adopted by the car carrier industry ensure that there is always sufficient time and that accurate data is available on completion of cargo operations to enable the stability of such vessels to be properly calculated before departure.

Read the full MAIB report by clicking the image below.

A safety flyer for the shipping industry has also been produced summarising the accident and detailing the safety lessons learned. Click below image to read.