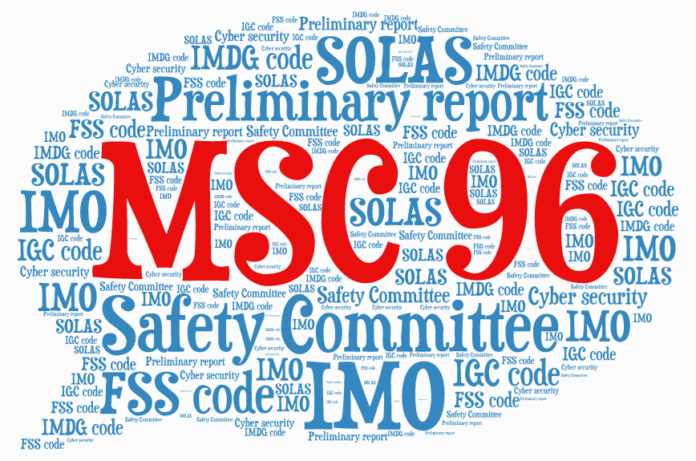 The 96th session of the IMO Maritime Safety Committee (MSC 96) was held at the headquarters of the IMO in London from 11 to 20 May. A summary of the outcome is given hereunder for your information.

Mandatory requirements were adopted as follows:

Mandatory requirements were approved at this session, which are expected to be considered for adoption at MSC 97 in November 2016.

Amendments to paragraph 3.2.5 of the IGC Code were approved, for deletion of the provision that the wheelhouse windows facing the cargo area shall be constructed not less than “A-0” class.

3. GBS (Goal-Based Standards for the design and construction of new ships)

GBS of new ships for oil tankers and bulk carriers have been discussed since MSC 78 in 2004. At MSC 87 in May 2010, amendments to SOLAS to implement GBS were adopted.
GBS is applied to oil tankers and bulk carriers contracted for construction on or after 1 July 2016. Design and construction of these ships shall comply with rules deemed as compliant with GBS.
The verification audit on rules of IACS members were conducted between March 2014 and July 2015. In December 2015, IACS and its members submitted corrective action plans in response to the audit findings.
At this session, GBS verification audit reports and corrective action plans submitted by IACS were considered. As a result of the deliberation, it was confirmed that rules of IACS members comply with GBS. It was also confirmed that oil tankers and bulk carriers, which are contracted for construction on or after 1 July 2016 and constructed in compliance with these rules, should be deemed as compliant with GBS. IMO has published MSC.1/Circ.1518 to disseminate the results of MSC 96.

4. Approval of guidelines etc.
The following unified interpretations (UIs) and guidelines were approved during MSC 96.

5. Cyber Security
At previous session, it was pointed out on the importance of maritime cybersecurity on board ships, and the development of countermeasures on this issue.
At this session, BIMCO et al. submitted a document providing industry guidelines on cybersecurity on board ships in response to vulnerability of ships to cybersecurity risks. United States et al. submitted a document proposing the development of non-mandatory guidelines for cyber risk management to assist in protecting and enhancing the resiliency of cyber systems.
As a result of discussion, interim guidelines on maritime cyber risk management were approved. The guidelines stipulates functional elements that support effective cyber risk management, such as identification of systems that pose risks to ship operations, detection of cyber event in a timely manner, and protection/recovery of systems necessary for shipping operations etc.