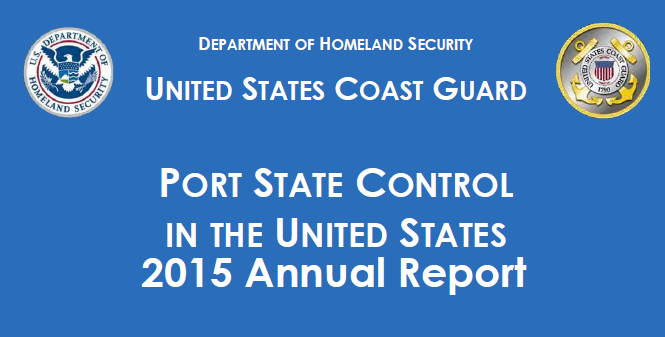 The US Coast Guard posted the 2015 Annual Report on Port State Control (PSC) in the United States. Detentions, which had been on a decline, rose for the second straight year.

Vessel Arrivals and Examinations Decreased, Detentions Increased
In 2015, a total of 8,925 individual vessels, from 81 different flag administrations, made 73,752 port calls to the United States. The Coast Guard conducted 9,265 SOLAS safety exams and 8,655 ISPS exams on these vessels. The total number of ships detained in 2015 for environmental protection and safety related deficiencies increased from 143 to 202. The total number of ships detained in 2015 for security related deficiencies slightly increased from 10 to 11. An overview of the safety related detainable deficiencies issued in 2015 can be found on page twelve of this report.

Detention Appeals
In addition to receiving appeals contesting the overall merits of a detention, we also receive appeals requesting the removal of a party’s association to a detention. In 2015, Coast Guard Headquarters received a total of twenty detention appeals. Seven appeals were submitted challenging the overall merits of the detention. Of those seven appeals, three were granted, three were denied, and in one case where there were two detainable deficiencies in question, one was granted and the other was denied. For those parties appealing their association with a detention, thirteen were granted and one was denied. Generally, the detention appeals that were overturned had only a single deficiency resulting from the PSC exam. In these cases the deficiency didn’t show an overall substandard condition on the vessel. For more information on the Coast Guard’s appeal process, please see our process guidance on page 5 of this report.

QUALSHIP 21 Program
The continued upward trend in detentions over last several years has started to have an effect on flag administration QualShip21 (QS21) eligibility. This year we had thirteen flag administrations drop their QS21 eligibility over 2015. Twelve were lost based on their three-year detention ratio exceeding 1.0% and one due to having fewer than ten distinct arrivals in 2015. We would like to welcome the flag administration of Italy, Mexico, and the Philippines for becoming QS21 eligible in 2016. From time to time there have been calls to change the criteria for entry into QS21 program. As comprised, the strict enrollment criteria provides a major incentive to vessels calling on U.S. ports. We feel any changes to diminish the criteria would not provide any additional incentives to increase quality standards in ships. We invite you to take a moment to see the full list of QS21 flag administrations in Chapter 2 of this report. 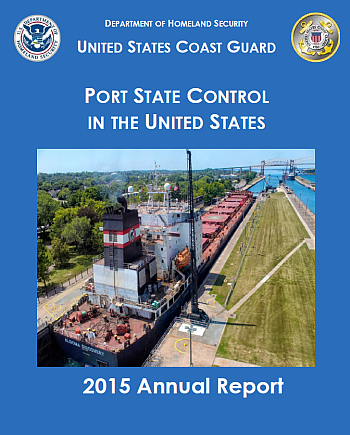