Following a failed attempt by Turkish military to overthrow president Recep Tayyip Erdogan, cruise lines have begun canceling calls beyond Istanbul, cruisecritic.com reports. Royal Caribbean, Carnival Cruise Line and Celebrity Cruises are among those that have altered itineraries due to political turmoil and airport closures.

All three cruise lines have replaced scheduled calls at Kusadasi with nearby ports in Greece or sea days. Celebrity also canceled a visit to Bodrum and will visit Sicily in its place.The U.S. Department of State continues to warn U.S. citizens of increased threats from terrorist groups throughout Turkey and to avoid travel to southeastern Turkey. It adds, "In light of the July 15 coup attempt and its aftermath, we suggest U.S. citizens reconsider travel to Turkey at this time."The Federal Aviation Administration also released a notice prohibiting U.S. airline carriers from flying to or from the Istanbul and Ankara airports. Similarly, the U.K. Foreign and Commonwealth Office advises against all but essential travel to most of southeastern Turkey (all travel in some areas). It adds that travelers should be vigilant in resort cities, such as Marmaris and Bodrum.

The Australian Department of Foreign Affairs and Trade also cautions travel to Turkey, highlighting Istanbul and Ankara. Holland America, Princess Cruises, Cunard, Seabourn, Silversea, Windstar, Star Clippers and TUI Cruises also have calls scheduled at various ports throughout Turkey. Cruise Critic has reached out to the lines and will continue updating this story as more information becomes available. Below is a list of the latest itinerary changes and statements.

Carnival Cruise Line CARNIVAL VISTA's July 17 and July 20 calls at Kusadasi have been replaced by sea days. The line issued the following statement: "We will continue to monitor the situation in Turkey in conjunction with global security experts and make a determination with respect to Carnival Vista's future calls in Kusadasi (beyond July 20) in the coming days."

Celestyal Cruises CELESTYAL OLYMPIA and CELESTYAL CRYSTAL did not call at Kusadasi and Cesme July 16, 17 and 18. The ships instead visited the Greek islands of Samos and Chios. The line said, "Our company is closely monitoring the situation and will inform about any further changes in its itinerary, always having as its priority the safety and comfort of passengers and crew. " 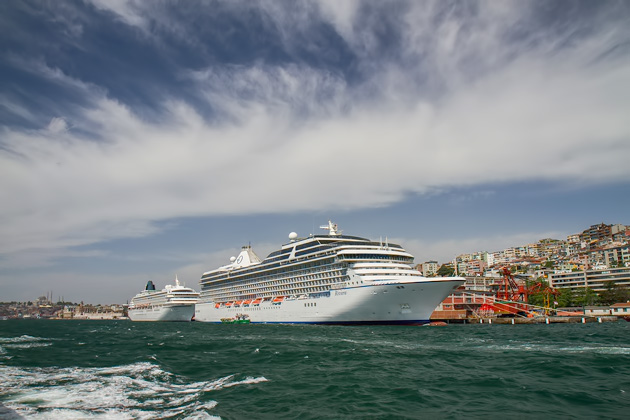 Holland America Line EURODAM will call at Kusadasi July 23 and continue to handle itineraries that include Istanbul on a case-by-case basis.The line has issued the following statement: "Holland America Line has been closely monitoring current events in Istanbul, Turkey, and, out of an abundance of caution, we have made the following changes to cruises visiting the port on the below sailing." EURODAM, which is scheduled to depart from Venice for an Eastern Mediterranean cruise July 17, has canceled stops in Istanbul and Mytilene, Nisos Lesbos, Greece. Instead, the ship will visit Mykonos (July 22), Kusadasi (July 23), Rhodes (July 24) and Crete (July 25).The line also said, "Shore excursions booked in affected ports through Holland America Line will be refunded and taxes, fees and port expenses will be adjusted accordingly."

Princess Cruises ROYAL PRINCESS is still slated to visit Kusadasi July 27 and August 1, according to a Cruise Critic member on our forums.In a statement released earlier this month, Princess said, "...the remaining Istanbul schedule for 2016, will be evaluated over the next couple of weeks and decisions will be made based on the available information and circumstances at the time."The smaller Turkish ports such as Kusadasi will remain on the schedule for the present time. Guests who have prepaid Istanbul shore excursions will be reimbursed via their onboard account."

Royal Caribbean Cruises Ltd.The parent company of Royal Caribbean International and Celebrity Cruises issued the following statement: "After reviewing all of the available information, Royal Caribbean Cruises Ltd. has decided to cancel our next three calls to Turkey."VISION OF THE SEAS, which was scheduled to call at Kusadasi July 19, will visit Chania, Crete, instead.Brilliance of the Seas also will replace its July 20 Kusadasi call with Chania, Crete. CELEBRITY REFLECTION, due to visit Kusadasi July 24 and Bodrum July 25 has adjusted its itinerary to call at Rhodes July 25 and Sicily July 27.They added, "As we continue to monitor the situation in Turkey, Royal Caribbean will contact guests or their travel agents should we make any additional modifications to future itineraries."

Uniworld Boutique River Cruise Collection RIVER DUCHESS, whose "Highlights from Eastern Europe" itinerary was slated to depart July 16 from Istanbul, instead began in Bucharest (the original end point).In a statement, the line said: "We had an itinerary that was due to depart on July 16, and given the situation and the airport closures, we contacted guests and asked them to reroute to Bucharest, where they were met at the airport and accommodated at the Radisson Blu. They spent the weekend in Bucharest and joined the planned itinerary today, July 18."Currently, we are evaluating all future cruises starting and ending in Istanbul and will provide an update on those itineraries shortly.