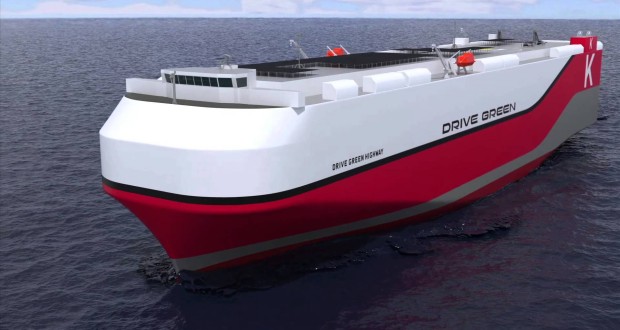 More than 900 solar panels have been installed on the top deck of a new Japanese car carrier which can lay claim to be one of the world's most environmentally-friendly seafaring transport vessels.

Drive Green Highway, which can carry up to 7,500 vehicles, was launched from Nagasu Port in Kumamoto, southern Japan, earlier this month. This awesome vessel integrates many of the maritime industry's most advanced eco-compliant, energy-saving technologies and design improvements to minimise its impact on the environment.

Eco-inspired innovations range from greenhouse gas suppression systems in the ship's engines to the vast array of solar panels which will generate enough clean energy to provide power for all LED lighting on the vessel's car decks. The panels, developed by ecological solar energy solutions provider Solar Frontier, have an electricity-generating capacity of up to 150 kilowatts, more than any other ocean vessel.

Ship owner Kawasaki Kisen Kaisha - better known as K Line - chose the CIS solar panel modules because they generate greater amounts of electricity in real-world conditions than crystalline silicon panels. Their strength in hot, salt-mist, ocean environments will be a major benefit for the huge carrier as it transports cargo around the world. The amount of power that can be generated by the on-deck renewable energy technology will make this the maritime industry's largest power solar energy system.

"K Line is demonstrating how solar energy can improve energy efficiency and reduce the ecological impact of the shipping industry," says Atsuhiko Hirano, chief executive officer at Solar Frontier. "This is one example of the greater role that solar energy has to play in our future, supporting an ever broader range of technologies in a wider range of industries."

Drive Green Highway is the first of eight similar car carrier vessels being built within K Line's game-changing Drive Green Project, an ambitious green shipbuilding programme which is capitalising on new and emerging marine technologies to save energy, reduce harmful emissions and minimise each vessel's impact on the environment.

Combining the benefits of cutting-edge design and technology improvements, Drive Green Highway - described as the world's highest standard, next generation environmentally-friendly flagship – is expected to make a major contribution to the greener shipping cause by achieving a substantial reduction in exhaust emissions, including 50 per cent less nitrogen oxides (NOx), 90 per cent less sulphur oxides (SOx) as well as a 25 per cent reduction in carbon dioxide emissions.

In many ways, this impressive ship will be capitalising on its sheer size to radically improve fuel consumption and emissions efficiency in comparison with conventionally-designed vessels. The ship is 200 metres (over 650 feet) in length, 37.5 metres (over 120 feet) wide and features a stylish, streamlined design which - as well as helping to reduce wind resistance by as much as 20 per cent - enables it to pack in as many as 7,500 passenger vehicles on each journey.

The ship will benefit from a range of other efficiency-improving techniques and energy-saving technologies, including:
• inverter control, which has a large energy-saving effect, is used for the engine draught fan and cooling seawater pump
• an exhaust gas recirculation system ensures waste heat from diesel-powered generators is recycled and used effectively
• a high efficiency propeller will add a further two per cent energy savings
• low friction hull paint will reduce drag and is expected to reduce fuel consumption by two to four per cent compared with conventional paint
• asymmetric fins positioned either side of the rudder will save fuel and enhance vessel speed through water
• the streamlined, wind-resistant reduction design will also make the vessel more energy efficient
• an optimal voyage support system will improve fuel consumption and cut CO2 emissions by as much as five per cent.

Renewable energy will power LED lighting throughout the vessel.