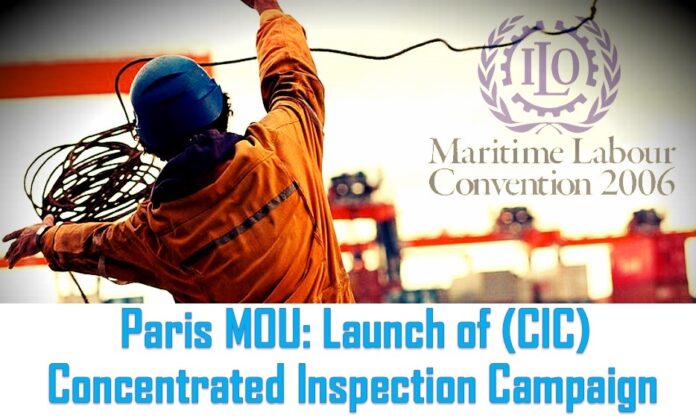 The Paris Memorandum of Understanding (MoU) on Port State Control will launch a Concentrated Inspection Campaign (CIC) on the Maritime Labour Convention, 2006 (MLC,2006). The aim of the CIC is to verify that the minimum standards for working and living conditions have been implemented on board. This inspection campaign will be held for a period of three months, commencing from 1 September 2016 and ending 30 November 2016.

The ship’s procedures and measures that are in place with respect to MLC,2006 will be checked in detail for compliance with the requirements during a regular Port State Control inspection.

Secretary General Richard Schiferli stated: “Working and living conditions on board have always been a prime area of attention. With the introduction of the MLC enforcement opportunities have greatly improved. Three years after the entry into
force, the time is right to focus on the MLC during a concentrated inspection campaign”.

Port State Control Officers (PSCOs) will use a list of 12 selected questions to ensure that the required certificates and documentation are present, in particular those related to the seafarers on board. Additionally there are questions aimed at
verification of records of the inspections of the accommodation, food and catering, and whether a safety committee has been established.

When deficiencies are found, actions by the port State may vary from recording a deficiency and instructing the master to rectify it within a certain period of time to detaining the ship until serious deficiencies have been rectified. In the case of
detention, publication in the monthly detention lists of the Paris MoU web sites will take place.

It is expected that the Paris MoU will carry out approximately 4,500 inspections during the CIC.