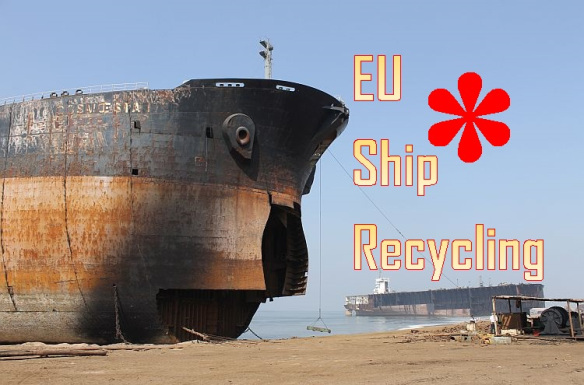 (www.MaritimeCyprus.com) On 19 December 2016, the European Commission adopted the first version of the European List of ship recycling facilities. The first 18 shipyards included in the List are all located in the EU. They fulfil the strict requirements for inclusion in the List and as a result will have exclusive access to the recycling of ships flying the flags of Member States of the Union. The European Commission has also received applications from yards located in third countries. The applications are being thoroughly reviewed and site inspections will be conducted to check their credentials. The Commission will decide in 2017 on their inclusion in the List.

According to the EC, worldwide, around 1000 large end-of-life ships are dismantled every year to recycle the steel and equipment. Most of this ship recycling takes place in South Asia, often on tidal beaches and under dangerous conditions which lead to health risks and extensive pollution of coastal areas. In fact, old ships contain many hazardous materials including asbestos, polychlorinated biphenyls (PCBs), tributyl tin and large quantities of oils and oil sludge.

The Hong Kong International Convention for the Safe and Environmental Sound Recycling of Ships (HKC) was adopted on 15 May 2009 by an IMO Diplomatic Conference. This Convention covers the design, construction, operation and preparation of ships so as to facilitate a sustainable ship recycling without compromising the safety and operational efficiency of ships. It also regulates the establishment of an appropriate enforcement mechanism for ship recycling, incorporating certification and reporting requirements. From 2011, the IMO developed several Guidelines to assist the States Parties in the early implementation of the Convention’s technical standards.

Apart from holding a licence in their respective country, facilities intending to become EU-listed have to provide a certificate from an independent verifier with expertise in the ship recycling sector and have to accept additional audits if deemed necessary by the European Commission.

In order to be approved, ship recycling facilities need to show that they meet both the strict requirements of the EU Ship Recycling Regulation regarding infrastructure and procedures, for instance, those meant to guarantee the containment of all hazardous substances and their safe removal as well as safe conditions for the workers.
Beyond the structures necessary within the yard, the approval of facilities also depends on proper downstream waste management as well as the guarantee of all core labour rights –both broadly equivalent to European standards.