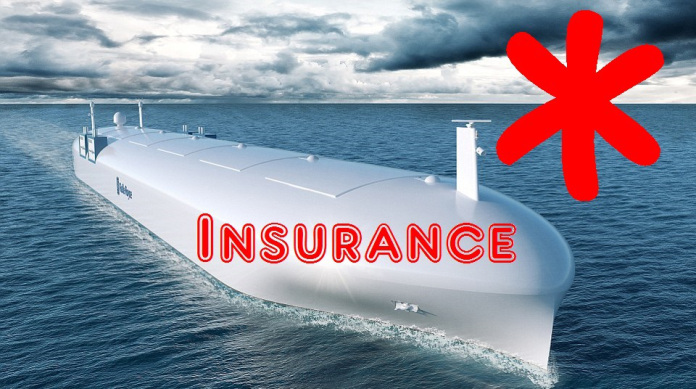 Autonomous ships are being explored by the cargo industry, giving marine insurers about five years to determine the costs of covering a crewless ship for risks that can occur at sea.

And the lack of historical data typical of any new technology is complicating the process of underwriting the risks of unmanned ships.

“We need a method to safely and effectively implement unmanned vessels and get the data we need,” Mr. Kinsey said. He suggested a convoy scenario, where several unmanned vessels would be chaperoned by a manned vessel, “riding herd, like a sheepdog,” he said.

An autonomous vessel would be best suited to replace dry-bulk carriers that operate in intercontinental trade, according to three-year research project Maritime Unmanned Navigation through Intelligence Networks, as these ships travel slowly, transporting cargo such as timber or steel in long, uninterrupted ocean voyages.

“The insurance industry has been at the forefront of most pioneering projects now covering drones, satellite launches, satellites in orbit, test flights, remotely controlled underwater vehicles and a number of other automated products,” Sean Woollerson, London-based senior partner at JLT Specialty Ltd., said in an email. “But a vessel being operated remotely from onshore will bring unique challenges in the developing of a fully automated complex key component for the supply chain.”

Those challenges include pirates, a fire at sea and the time involved to reach the ship if a computer malfunctions.

Alan Jervis, founder of Marine, Transportation and Energy Insurance Experts, a consultant to the worldwide insurance, risk management, shipping and transportation industries based in Toronto, points out that a ship is different than other vehicles that may operate autonomously. For one, a cargo ship will be isolated on the ocean. “One of the duties of the crew is to ensure the cargo is inspected, that it doesn’t leak or break through and cause a fire,” Mr. Jervis said.

Shipping services provider Clarkson P.L.C. puts the number of cargo ships operating now at 9,600. Though none are unmanned, crewless smaller vessels are expected to be in use in three to five years, with larger merchant ships, those carrying oil and heavier cargo, arriving in 10 to 15 years, according to the Royal Institute of Naval Architects, a London-based professional organization whose members work in the design, construction, maintenance and operation of marine vessels and structures.

Europe is prime territory for their use, facing issues such as increased cargo volume and environmental requirements and a decline in the number of sailors. So the Europe Commission funded the three-year MUNIN research project to investigate the possibilities of unmanned ships.

MUNIN, completed in August 2015, used 10 years of global manned ship data to compare risks of manned ships to those of unmanned ships and projected that an unmanned ship would have one-tenth of the risk of a manned ship in foundering and collision, in which human error often plays a role. The analysis also predicted a savings of $7 million over a 25-year period per ship in fuel use and crew supplies and salaries.

“This is less about pros and cons of a crew and more about how insurers can analyze risk,” Tom Hoad, London-based head of innovation at Tokio Marine Kiln Group Ltd., said in an email.

“Undoubtedly one of the benefits is that better informatics means that insurers might be in a better position to calculate risk,” Mr. Hoad said of the advanced modeling tools risk managers use to determine risk. “Perhaps one of the downsides, though, is the question of what new risk emerges from not having a crew.”

To Mr. Jervis, liability and a credible backup plan if something goes wrong at sea would be paramount to cover the millions of dollars of cargo generally on ships. “There wouldn’t be anyone there if there was a breakdown of the computer systems,” Mr. Jervis said. “You could have a train break down in the city of Chicago and a crew could come in minutes, but the Atlantic can be a one-week voyage and the Pacific two to three weeks.”

When it comes to drone technology in any line of transportation, there is no “one-size-fits-all” approach. “Insurers have to look at every risk on a case-by-case basis and decide what the individual threats are,” Mr. Hoad said.

Typically insurers calculate risk by comparing the known volatility of a similar class to the new one, he said. For example, light aircraft gave the industry more data about unmanned aerial vehicles.

But vessels have unique risks, such as pirates. Although the Royal Institute of Naval Architects considers pirates to be “virtually a nonissue for fully unmanned ships,” it cites the lack of crew to take hostage and the ease of creating control systems that cannot be operated by nonauthorized personnel. “Pirates would need an ocean-going tug to steal the ship or cargo,” the organization said in a January statement.

With 23 years in the Merchant Marines, including 13 as captain of five vessels, Mr. Kinsey disputes that, saying an unmanned vessel at sea would be at higher risk of piracy.

Speaking from experience with pirates, he said: “I believe that a human presence on board with active piracy measures in place is an effective deterrent to a pirate boarding.”