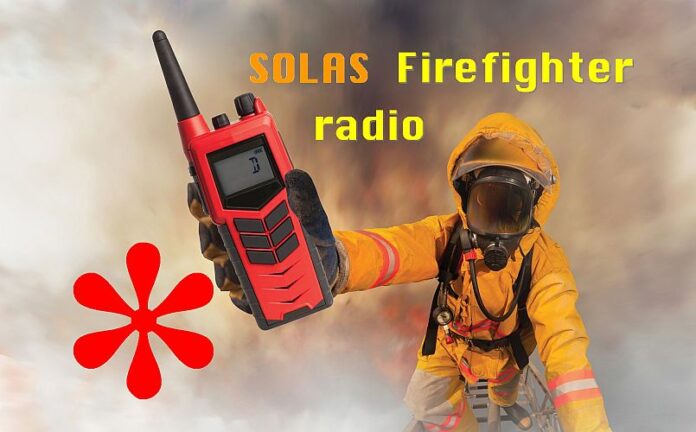 “For ships constructed on or after 1 July 2014, a minimum of two two-way portable radiotelephone apparatus for each fire party for fire-fighter’s communication shall be carried on board. Those two-way portable radiotelephone apparatus shall be of an explosion-proof type or intrinsically safe. Ships constructed before 1 July 2014 shall comply with the requirements of this paragraph not later than the first survey after 1 July 2018.”

For ships constructed on or after 1 July 2014

The amount of vessels constructed before 1 July 2014 (the existing fleet) is approximately 89,000 vessels of which approximately 60,000 – 65,000 are covered by the SOLAS regulation and therefore by Regulation 10.10.4 Other non-SOLAS vessels are expected to implement Regulation 10.10.4 although the amount of such vessels is difficult to estimate since some of these will implement Regulation 10.10.4 on the owner’s voluntary decision. The requirement for fire-fighter radios until final implementation date on 1 July 2018 is approximately 260,000 to 300,000 units over a period of less than 3 years from now, which will pose an exorbitant requirement for timely delivery prior to survey of the vessels trading worldwide.

In Regulation 10.10.4 the deadline for vessels constructed before 1 July 2014 to comply with the Regulation 10.10.4 is “…not later than the first survey after 1 July 2018.” Vessels are covered by various mandatory surveys during their active life time i.e. Radio Survey, Survey of Life-Saving Appliances, Surveys on structure, machinery etc. The time for the various individual surveys may be different depending on type of vessel, type of survey, type of equipment, the anniversary of the vessel and date of latest survey carried out. Radio installations, including those used in life-saving appliances of cargo ships and passenger ships to which SOLAS Chapters III and IV apply, shall be subject to Initial Surveys, Renewal Surveys and Periodical Surveys at specified intervals. Live-saving appliances are subject to similar surveys however i.e. radio installations are not part of the life-saving appliance survey.

The fire-fighter radios are described in SOLAS Chapter II-2, Regulation 10.10.4. The extent of the individual survey naturally depends on the individual equipment under the SOLAS requirements specified in IMO performance standards further detailed in IEC/ISO test standards for such equipment. These requirements are enforced by the vessels flag state. For vessels flying the flag from an EU member country and for many vessels flying a flag of convenience these requirements are for radio communication equipment administrated under the Marine Equipment Directive (MED). Equipment not covered by the MED administration is managed under the R&TTE Directive, which is being replaced by the Radio Equipment Directive (RED). In both the R&TTE and the new RED maritime electronics are required to be approved according to EN/IEC 60945, and the relevant radio communication standards, i.e. ETSI to ensure that equipment is suitable for use in the marine environment and has passed a predefined set of test to prove the performance standards.

The inspection and survey of ships, as to regards of the enforcement of the provision of the regulations and granting of exemptions therefrom, is administrated by the flag state and carried out by officers of that administration, but more often this is entrusted to the inspections and surveyors nominated for the purpose or to organizations recognized by the Administration.

The surveyor will carry out inspection and surveys requested by the appropriate flag state and if, determined by the surveyor that the conditions of the ship or its equipment does not correspond substantially with the particulars of the certificate in question, shall immediately ensure that corrective actions is taken. Additional to the inspections required by the flag state, port states are able to perform additional inspections on their own initiative.

When applicable, the Government of both port state and flag state shall ensure that the ship is seaworthy and sail without danger to the ship, the environment, and persons on board.

All ships: According to Chapter II-2, regulation 10.10.2.1 all ships shall carry at least two fire-fighter´s outfit.

Tankers: According to Chapter II-2, regulation 10.10.2.3 an additional two fire-fighter’s outfits shall be provided on tankers.

Each Fire Party must have at least two of these dedicated radios and as fire-fighters may need to use Direct Mode Operation (DMO1 ) during fire-fighting operations or if the Fire Party consist of more crew members than the actual fire fighters, i.e. incident commander, the actual number of fire-fighter radios may vary from vessel to vessel as more than two radios may be required for each Fire Party. The purpose of these fire-fighter radios is to provide a dedicated means of communication between a team of fire fighters entering the space, and the crew member located outside the space who is assigned to control this team.

According to Chapter II-2, Regulation 10.2 fire-fighter’s outfit shall be kept ready for use in an easily accessible location which is clearly marked. Regulation 10.10.4 does not provide recommendation on the placement of fire-fighter radios.

As a fire on board a vessel can spread within minutes it is of paramount importance that there is easy access and that the fire-fighter outfit and equipment is ready to use. This is typically secured by placing it in permanently and clearly marked locations i.e. lockers on deck or in passageways.

Depending on the type or size of the vessel, more fire-fighter outfits may be required and this will then be stored in widely separated locations.

Fire-fighter radios might be marked or coloured to identify such radios from other on board portable radios with regards to ensure that they are kept ready for use and that they are recognizable to the surveyor during survey.

To secure readiness of the fire-fighter radio, they may be placed in chargers providing constant charge to the radio battery, but considerations should be made since chargers are not explosion proof and must be placed outside hazardous areas. Radio batteries will slowly be impaired when being constantly charged and although regular Fire Drills includes checking of relevant communication equipment and also read-out of battery status from the radio display, considerations should be made to have i.e. emergency back-up power battery pack for instant use during the charging time for the ordinary battery.

Emergency back-up batteries will shorten the time from the outbreak of a fire to the deployment of the Fire Party in case radio battery for one or more fire-fighter radio is not usable (i.e. not charged) Charging time for a radio battery for portable radios which is fully discharged is typically between 4 to 5 hours. Emergency batteries are non-rechargeable but will maintain their capacity for a period of 5 – 6 years if not activated before expiry. Emergency batteries will typically provide power for the radio in a period of 6 to 8 hours.