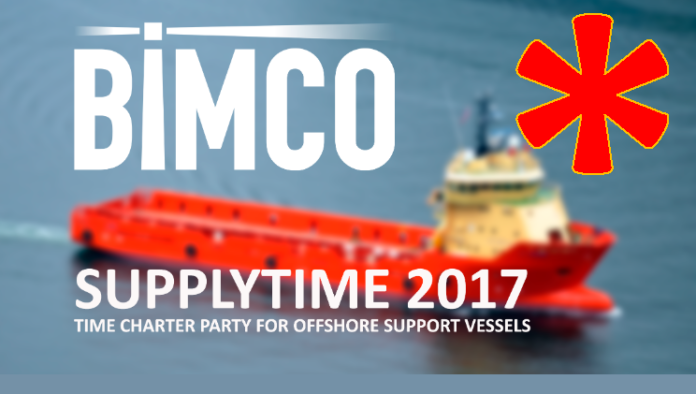 BIMCO has published a new edition of SUPPLYTIME, its widely used time charter party for offshore supply vessels. Now in its fourth edition, BIMCO’s best-selling contract has been updated to reflect contemporary shipping practice and legal developments in the offshore sector. It has a purer knock for knock liability regime and is more neutrally balanced than its predecessor.

The first edition of SUPPLYTIME appeared in 1975. It was developed to meet the demand for specialist support vessels to serve a rapidly growing offshore oil and gas exploration and production industry. Since then, SUPPLYTIME has become the benchmark for offshore support vessel agreements – and the industry’s contract of choice.

“Over the past ten years or so we have seen a hardening of the terms and conditions in charterers’ own contracts. This has created a widening gap between SUPPLYTIME 2005 and what charterers wanted. The number of amendments required to get the 2005 edition accepted has grown. For this reason, it was an appropriate time to update SUPPLYTIME and address these issues and to overcome the objections some charterers might have to the form”.

Grant Hunter, Head of Contracts and Clauses at BIMCO added:

“SUPPLYTIME 2017 is a more neutrally balanced contract than its predecessors. Most of the exceptions to its knock for knock liability regime have been removed to broaden its appeal. New or re-worded clauses cover critical issues such as suspension and termination, maintenance days, common fuel systems, surveys and audits, and layup”.

During the two-year development process BIMCO invited the offshore sector to comment on the draft of the new edition. This provided valuable feedback on what end-users wanted to see added or improved in SUPPLYTIME 2017.

SUPPLYTIME 2017 is available to use by subscribers to BIMCO’s charter party editing system, IDEA. Copies of the contract along with explanatory notes are available from BIMCO’s website at www.bimco.org