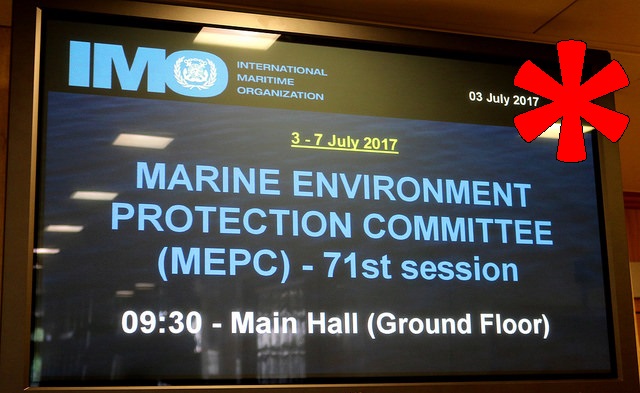 The 71th session of the IMO Marine Environment Protection Committee (MEPC 71) was held at the headquarters of the IMO in London from 3 to 7 July. A summary of the outcome is given hereunder for your information.

1.1 Installation schedule of Ballast Water Management Systems
At Assembly 28 held in 2013, resolution A.1088(28) was adopted, in which existing ships were allowed to be exempted from installation of the Systems until its first renewal survey for International Oil Pollution Prevention (IOPP) Certificate following the date of entry into force of the Convention. At MEPC 69, draft amendments to regulation B-3 of the Convention reflecting the requirements of resolution A.1088(28) were approved. The draft amendments were expected to be
adopted at MEPC 72 which will be held following the entry into force of the Convention.

At MEPC 70, there was an alternative proposal to revise installation schedule of the Systems which allows further additional extension to existing ships. However, there were divergent opinions, and conclusion on this matter could not be reached at MEPC 70. At this session, a compromise proposal between resolution A.1088(28) and the alternative proposal was considered. As a result of the discussion, the draft amendments to regulation B-3 of the Convention, which revise the installation schedule for new ships and existing ships, were approved as follows.

Further, it should be noted that ships of 400 gross tonnage and above to which the Convention applies are required to possess the valid Certificate before 8 September 2017, the date of the entry into force of the Convention, irrespective of the System is installed or not.

1.2 Ships operating in areas where ballast water exchange is not possible
After the entry into force of the Convention and until installation of the System, the ballast water exchange shall be conducted in accordance with requirements of regulation D-1. Regulation B-4 specifies that ballast water exchange shall be conducted in sea areas where distance from the nearest land is at least 200 nautical miles (if not possible, 50 nautical miles) and water depth is at least 200 metres, or in the designated area instructed by the port States if there are no areas
which can meet the requirements of regulation B-4.

At this session, several countries proposed to develop guidance for ships operated in the areas which don’t satisfy requirements of regulation B-4, in order not to deviate from the intended voyage, or delay the voyages. As a result of the discussion, it was agreed to publish BWM circular which stipulates that ships operating in sea areas where ballast water exchange in accordance with regulation B-4.1 is not possible should record the reasons why ballast water exchange was not conducted in accordance with regulation B-4.5.

1.3 Gravity discharge for topside tanks
Technical obstacles and financial burden are expected when altering existing bulk carriers equipped with the gravity discharge system for the topside ballast tanks. INTERCARGO proposed amendments to the Convention which allow those ships to conduct the ballast water exchange instead of the installation of the System even after the deadline of the installation of the System. As a result of the discussion, many countries expressed the view that there were already ships installed the System and the retrofit is not structurally impossible, and no agreement was reached on this proposal.

1.4 Contingency measures
At MEPC 68 held in May 2015, it was agreed to develop guidance on contingency measures in case that a ship is unable to manage ballast water in accordance with its approved Ballast Water Management plan.
As a result of the discussion, it was agreed to publish the guidance as BWM circular to stipulate followings. In case of non-compliant ballast water:
• discharging ballast water to another ship or land-based reception facility etc., as an alternative measure.
• Having considered all the alternative measures, ballast water may be discharged, as acceptable to port State.
• Ships should take appropriate measures such as repair of the System in consultation with the port authority.
• During the experience-building phase described later in item 1.5, the principle of non-penalization for ships which installed the System early should be taken into account.

1.6 Code for approval of Ballast Water Management systems
At MEPC 70, the revised G8 Guidelines was adopted to strengthen testing requirements of the Systems. MEPC 70 also agreed to rename the G8 Guidelines as Code after the entry into force of the Convention.
At this session, draft Code for approval of Ballast Water Management systems (BWMS Code) and draft amendments to regulation A-1 and D-3 of the Convention to make reference to the Code were approved.
The draft Code and the draft amendments to the Convention are expected to be adopted at MEPC 72.

2. Greenhouse Gases (GHG)
Countermeasures against the GHG emissions from international shipping have been deliberated at IMO, and so far, the Energy Efficiency Design Index (EEDI) and the Ship Energy Efficiency Management Plan (SEEMP) have been implemented.

At MEPC 70, amendments to MARPOL Annex VI to include the data collection system for fuel consumption of ships as a measure to further improve the energy efficiency are adopted.

2.1 Review of technological developments for EEDI
Regulation 21.6 of MARPOL Annex VI requires, at the beginning of phase 1 and at the midpoint of phase 2, a review of the status of technological developments which may contribute to the improvement of EEDI. If it is proven necessary, MEPC will amend the relevant requirements, i.e. “when to start the phase,” “the EEDI reference line parameters” and “the reduction rate”.

At MEPC 70, it was agreed to retain the reduction rates for phase 2 except for ro-ro cargo ships and ro-ro passenger ships. Further, taking into account that some ship types have already complied with the reduction rates for phase 2 and/or phase 3, it was proposed to consider an early implementation of phase 3 and possible introduction of phase 4. As a conclusion at MEPC 70, it was agreed to conduct a review of phase 3 as soon as possible.

At this session, it was agreed to establish a correspondence group, to consider an early implementation of phase 3 and possible introduction of phase 4.
On the other hand, for ro-ro cargo ships and ro-ro passenger ships which have difficulties to comply with phase 2 requirements, it was pointed out that, due to lack of sufficient data when calculating EEDI reference lines, stringent reference line for those ship types were established.

As a result of the discussion at this session, it was agreed to increase the reference line for ro-ro cargo ships and ro-ro passenger ships by 20% and draft amendments to MARPOL VI which reflect the increase were approved. The draft amendments are expected to be adopted at MEPC 72.

2.2 Guidelines for determining minimum propulsion power
Guidelines for determining minimum propulsion power to maintain the maneuverability of ships in adverse conditions were developed in order to avoid construction of extremely under-powered ships along with implementation of EEDI requirements. The guidelines stipulated two assessment methods, i.e. level 1 and level 2. At MEPC 68 held in 2015, amendments to the guidelines were adopted to strengthen requirements of level 1 and to extend application period of the guidelines to phase 1 of EEDI regulation. Further, it was agreed that a review of the level 2 assessment would be conducted on completion of ongoing research projects of SHOPERA and JASNAOE.

At this session, the draft amendments to the guidelines reflecting the results of SHOPERA and JASNAOE projects were introduced. As a result of the discussion, it was agreed to continue discussion on level 2 assessment at MEPC 72 due to the fact that different opinions were expressed on the adverse weather condition etc. Further, for the current guidelines, it was agreed to extend the application period towards phase 2 of EEDI regulation.

At this session, the following guidelines which have been developed by the correspondence group were approved:

2.4 GHG emission reduction target
The Paris Agreement was adopted by consensus in December 2015 at the 21st Conference of the Parties of the UNFCCC (COP 21) and the ambitious target to limit the increase in the global average temperature to well below 2°C above pre-industrial levels, has been shared among the world.

As a work plan for the development of the strategy, intersessional meetings will be held in this autumn and in next spring to finalize the strategy at MEPC 72.

3. Air pollution 3.1 Sulphur content of fuel oils
At MEPC 70, it was agreed to implement the global 0.5% sulphur limit from 2020. At this session, to implement the global 0.5% sulphur limit, additional measures to promote an appropriate implementation of the global limit was considered. It was agreed that the consideration on this matter will be made at Sub-Committee on pollution prevention and response (PPR), and the completion of this work item should be in 2019.

3.2 Guidelines for Exhausting Gas Cleaning Systems
Regulation 14 of MARPOL Annex VI stipulates sulphur contents in fuel oil used by ships, to reduce the emission of SOx.
Regulation 4 of MARPOL Annex VI specifies that the use of alternative methods approved by the ships’ flag Administration can be used. “Exhaust Gas Cleaning System” (EGCS) is one of such alternative system and the IMO EGCS guidelines were developed to specify the technical standards on the system and the method of verification.

At this session, draft amendments to the guideline, which gives clarification on the technical terms, procedures for emission testing and the scheme for approval, were proposed. MEPC 71 agreed to consider this matter at the 5th session of Sub-Committee on pollution prevention and response (PPR 5) in detail.

At this session, draft guidelines developed by PPR were discussed, however, the need for further clarifications on the terms and the contents in the guidelines was identified. Therefore, it was agreed that the further considerations should be made at PPR 5 which will be held in January 2018.

Further, amendments to regulation 13.5 of MARPOL Annex VI were also adopted to exempt ships equipped with the dual fuel engine or Tier II NOx compliant engines, which are temporarily constructed, repaired or maintained at the shipyard located inside NOx ECA, from the NOx Tier III emission limit.