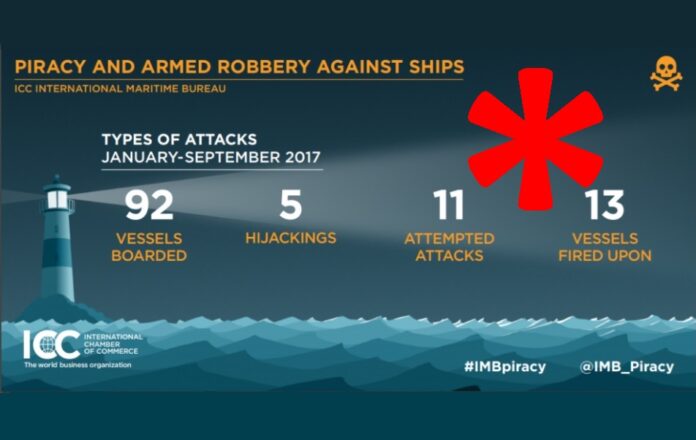 (www.MaritimeCyprus.com) A total of 121 incidents of piracy and armed robbery against ships were reported in the first nine months of 2017, according to the International Chamber of Commerce’s (ICC) International Maritime Bureau’s (IMB) latest quarterly report on maritime piracy.

The flagship global report notes that, while piracy rates were down compared to the same period in 2016, there is continuing concern over attacks in the Gulf of Guinea and in South East Asia. The increase in attacks off the coast of Venezuela and other security incidents against vessels off Libya – including an attempted boarding in the last quarter – highlights the need for vigilance in other areas.  In total, 92 vessels were boarded, 13 were fired upon, there were 11 attempted attacks and five vessels were hijacked in the first nine months of 2017. 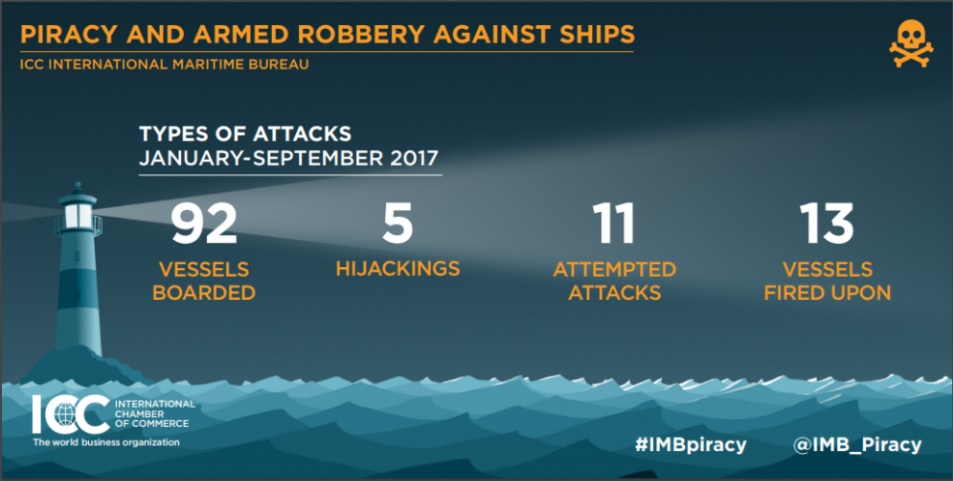 No incidents were reported off the coast of Somalia in this quarter, though the successful attacks from earlier in the year suggest that pirates in the area retain the capacity to target merchant shipping at distances from the coastline. Here are four main takeaways from the report:

One vessel was reported hijacked in the third quarter of 2017 when a Thai product tanker was attacked off Pulau Yu in Malaysia in early September. However, thanks to the prompt intervention of the Malaysian Maritime Enforcement Agency, 10 hijackers were successfully apprehended and the tanker was safely escorted to a nearby port. The pirates were quickly tried and sentenced to long periods of imprisonment.

“The Malaysian response demonstrates exactly the type of speedy and robust action that is needed to deter such attacks.” said Pottengal Mukundan, Director of IMB.

A total of 20 reports against all vessel types were received for Nigeria, 16 of which occurred off the coast of Brass, Bonny and Bayelsa. Guns were reportedly used in 18 of the incidents and vessels were underway in 17 of 20 reports. 39 of the 49 crewmembers kidnapped globally occurred off Nigerian waters in seven separate incidents. Other crew kidnappings in 2017 have been reported 60 nautical miles off the coast of Nigeria.

“In general, all waters in and off Nigeria remain risky, despite intervention in some cases by the Nigerian Navy. We advise vessels to be vigilant,” said Mr Mukundan. “The number of attacks in the Gulf of Guinea could be even higher than our figures as many incidents continue to be unreported.”

3. An uptick in violence off Venezuela

While only three low-level incidents took place in Venezuela during the same period in 2016, the number this year racked up to 11. All vessels were successfully boarded by robbers armed with guns or knives and mostly took place at anchorage. Four crewmembers were taken hostage during these incidents, with two assaulted and one injured.

4. Tackling piracy is a team effort

Perhaps the biggest takeaway of this quarter’s report is the proven importance of the 24-hour manned IMB Piracy Reporting Centre (PRC), which has provided the maritime industry, governments and response agencies with timely and transparent data on piracy and armed robbery incidents received directly from the vessels or owners, flag states or navies. The PRC’s prompt forwarding of reports and liaison with response agencies—using Inmarsat Safety Net Services and email alerts, all free of charge—has already helped bolster the response against piracy and armed robbery, keeping seafarers safe.

“One of the strongest weapons triggering the fight against piracy is accurate statistics,” said Mr Mukundan. “There should be free and reciprocal sharing of information between the IMB PRC and regional information centres. With a clearer picture of when and where violent incidents are taking place, authorities are able to better allocate their resources to tackle this global issue.”

You can download full 3rd Quarter 2017 report by clicking here.