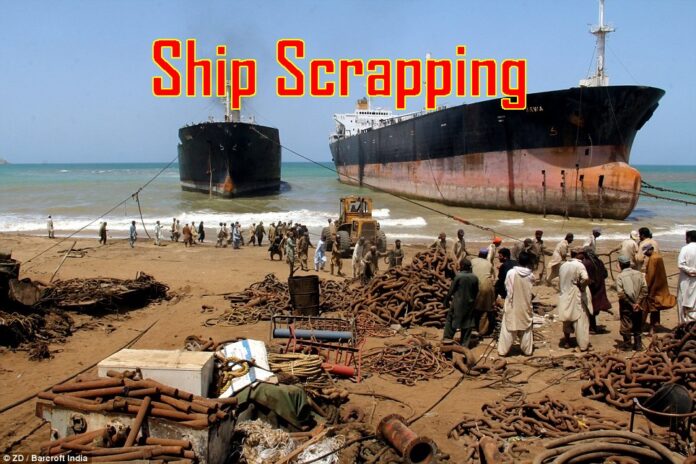 (www.MaritimeCyprus.com) By Dennis L. Bryant. Traditionally, when a ship reached the end of its economic life, the owner sold it, often to a cash buyer, for scrapping with little consideration of the next step. Many ships ended up on a beach in south Asia (India, Pakistan, or Bangladesh) where they were cut apart and the metal was sold for scrap. The working conditions were sometimes dangerous and hazardous to the workers’ health. In addition, little was sometimes done to protect the environment. For many ship owners these days, scrapping is (or should be) a matter requiring business considerations beyond the offered cash price.

A Belgian ship owner was recently fined €750,000 and two of its senior executives were banned from working in the shipping industry for a year after the company was convicted of the illegal export of vessels for scrapping in south Asian yards. The prosecutor had sought jail time for the executives, but the court expressed reluctance for such a measure as this was the first known criminal prosecution for illegal scrapping.

Hong Kong Convention
The Hong Kong International Convention for the Safe and Environmentally Sound Recycling of Ships, 2009 was negotiated under the International Maritime Organization (IMO) and signed in Hong Kong on 19 May 2009. Parties undertake to give full and complete effect to the Convention’s provisions in order to prevent, reduce, minimize, and, to the extent practicable, eliminate accidents, injuries, and other adverse effects on human health and the environment caused by ship recycling, and enhance ship safety, protection of human health and the environment throughout a ship’s operating life. The convention enters into force 24 months after the date on which the following conditions have been met: (1) not less than 15 states have ratified, approved, or acceded it; (2) the combined merchant fleets of member states constitute not less than 40% of the world’s tonnage; and (3) the combined maximum annual ship recycling volume of the member states during the preceding 10 years constitutes not less than 3% of the world’s tonnage. To date, there are six member states.

OECD Council Decision C(2001) 107/FINAL
The Organization for Economic Co-operation and Development (OECD) promulgated a Council Decision aimed at facilitating trade in recyclables in an environmentally sound and economically efficient manner by using a simplified procedure for trade between member states, as well as a risk-based approach for exports outside the OECD area, whether for recovery or final disposal. This decision of 30 March 1992 and its amendments are specifically intended to be in harmony with the Basel Convention. Thus, member states are obligated to adopt waste export procedures that are consistent with the Basel Convention. There are 35 member states, including the United States, Canada, Mexico, most European nations, Australia, New Zealand, Japan, and South Korea.

EU Regulation 1257/2013
The European Union (EU) Regulation on ship recycling and its associated Directive incorporated the Basel Convention and the Hong Kong Convention, making compliance with both mandatory for ships of EU nations and their owners and for other ships that become subject to EU jurisdiction by transiting through EU nations en route recycling. Raising the stakes, the Regulation imposes civil and criminal liabilities for noncompliance. This is the regulation that the Belgian shipowner was convicted of violating.

US RCRA statute and regulations
The US Resource Conservation and Recovery Act (RCRA) is the principal federal law governing the disposal of solid and hazardous waste. Among other things, it prohibits the export of hazardous waste from the United States unless the receiving nation has been properly advised of the planned export and approved such proposal. The statute includes civil and criminal enforcement mechanisms, including severe penalties for knowing endangerment. RCRA is administered by the Environmental Protection Agency (EPA), which has adopted specific regulations concerning transboundary movements of hazardous waste for recovery or disposal. As discussed above, these EPA regulations meet US obligations under the OECD Council Decision and are in harmony with the Basel Convention.

Ship recycling
Commercial vessels, almost without exception, contain hazardous materials, including but not limited to such items as asbestos, polychlorinated biphenyls (PCBs), and lead and other heavy metals. Thus, the recycling of a ship constitutes the disposal of hazardous waste under international, European, and US federal laws and regulations. The US government recently ceased efforts to export its vessels for scrapping in foreign countries. The Maritime Administration (MARAD) has withheld authorization to transfer US-flag vessels to foreign owners where there is evidence that the transfer is for scrapping.

Conclusion
The rules concerning ship scrapping are numerous, complex, and overlapping. Traditionally, many nations have ignored their obligations in this regard, imposing few if any restrictions on how ship owners address end of life issues. That laissez faire approach seems to be coming to an end.
It behooves ship owners to carefully consider options when their ships reach the end of their economic lives. While some economic benefit will be lost by scrapping those ships in full compliance with the various laws and regulations, there will be gains in the areas of worker safety and health and the environment. In addition, as the Belgian case clearly demonstrates, government agencies, prosecutors, and courts are increasingly willing to enforce the applicable requirements.