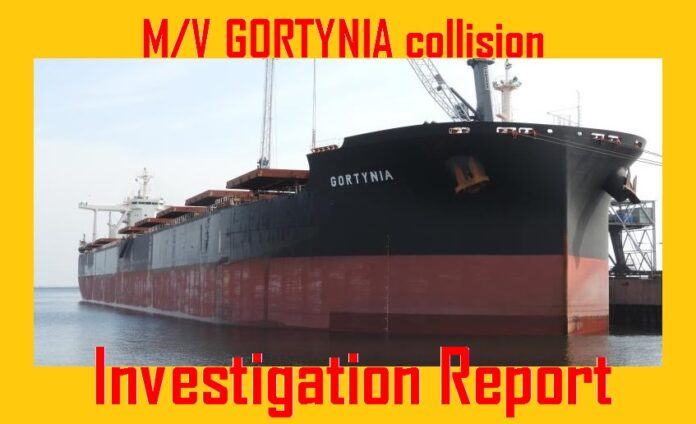 (www.MaritimeCyprus.com) Transport Malta issued the report of its investigation of the 17 May 2017 collision of the bulk carrier Gortynia and the bulk carrier DZ Qingdao in the Singapore Strait. Gortynia was east-bound and DZ Qingdao was west-bound prior to the incident and each in its respective TSS lane. DZ Qingdao suffered a loss of power. In addition to losing its propulsion and steering, the vessel ceased its AIS transmissions. Its unintended turn toward Gortynia was unnoticed by the second vessel’s bridge team which was monitoring AIS targets. Both vessels suffered substantial damage in the ensuing collision, but were able to proceed to anchorage under their own power.

SUMMARY
At about 0030 (UTC +8) on 17 May 2017, Gortynia, a fully laden cape size bulk carrier, collided with bulk carrier DZ Qingdao in Singapore Strait. The collision occurred in the East-bound deep water route of the traffic separation scheme (TSS) off Batu Berhanti.

Gortynia sustained major damage to her port side forward ballast tanks both above and below the waterline. The vessel also sustained varying degrees of damage to the port side hull and deck fittings from cargo hold no. 1 to just forward of the accommodation. DZ Qingdao also sustained major damages to her bow. Both vessels were able to proceed to an anchorage, off Singapore where the respective damages
were assessed.

The safety investigation concluded that prior to DZ Qingdao suffering a power loss resulting in a temporary loss of propulsion and steering, both vessels were approaching each other in their respective traffic separation lanes and were to pass clear of each other. The change in DZ Qingdao’s heading and speed meant that she now was at risk of collision with Gortynia as they approached each other. This change
was not noted on board Gortynia as the bridge team were only monitoring AIS targets on its radars, and with the loss of power on board DZ Qingdao, the AIS transmissionceased, causing the loss of the AIS plot.

DZ Qingdao did not warn VTIS and the surrounding vessels that she was not under command and as a result when the change in heading was detected by Gortynia, at a very late stage, this did not allow her to
take effective avoiding action in time to avoid the collision.

The Marine Safety Investigation Unit (MSIU) has made a number of recommendations to Eastern Mediterranean Maritime Ltd, the managers of Gortynia, aimed at addressing safety of navigation on board vessels under its management.

During the course of the safety investigation, the MSIU had very limited information on DZ Qingdao, her crew members and the dynamics leading to the collision with Gortynia. To this effect, the MSIU was unable to analyse and report on a more detailed operational context and perhaps enhance the possibility of preventing similar future accidents by making recommendations to the managers of DZ Qingdao. 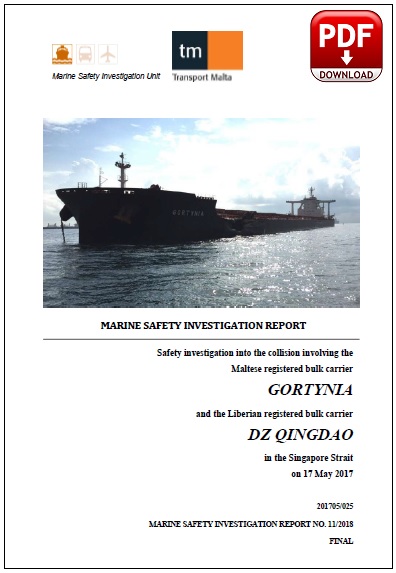 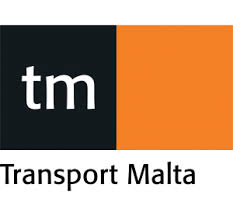