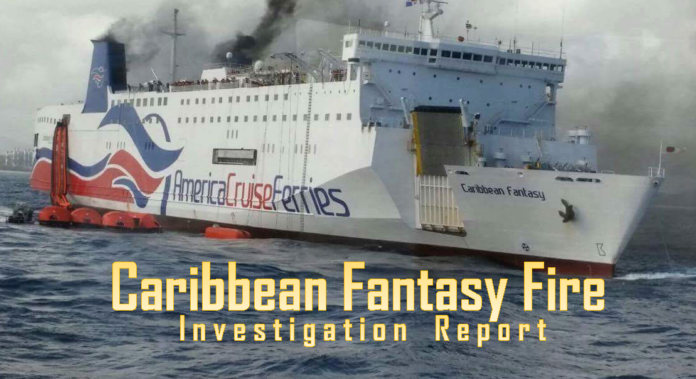 (www.MaritimeCyprus.com) The US National Transportation Safety Board (NTSB) issued a synopsis of its investigation of the 17 August 2016 fire that in the main engine room of the roro passenger vessel Caribbean Fantasy just outside the port of San Juan, Puerto Rico.

The fire was ignited when fuel spraying from a leaking flange came in contact with a hot surface on the port main propulsion engine. The fire could not be contained, so the master ordered the ship to be abandoned. US Coast Guard and other first responder vessels and aircraft, along with Good Samaritan vessels, helped transport all 511 passengers and crew into port. Several injuries, none life-threatening, occurred during firefighting and abandonment efforts.

The burning vessel drifted in the wind and grounded on the sandy bottom outside the port. Three days later, the vessel was towed into the harbor, where shore-based firefighters extinguished the last of the fire. The accident resulted in an estimated US$20 million in damage to the Caribbean Fantasy, which was eventually scrapped in lieu of repairs.

The probable cause of the fire was the poor safety culture of the vessel operator (Baja Ferries) and its ineffective implementation of their safety management system on board the vessel, where poor maintenance practices led to an uncontained fuel spray from a blank flange at the end of the
port main engine fuel supply line onto the hot exhaust manifold of the engine.

Contributing to the rapid spread of the fire were fuel and lube oil quick closing valves that were intentionally blocked open, fixed firefighting systems that were ineffective, and a structural fire boundary that failed. Contributing to the fire and the prolonged abandonment effort was the failure of the Panama Maritime Authority and the recognized organization, RINA Services, to ensure Baja Ferries’ safety management system was functional.

The full report will be available in a few weeks on the NTSB website.

The synopsis, findings and all recommendations related to the accident are available below: 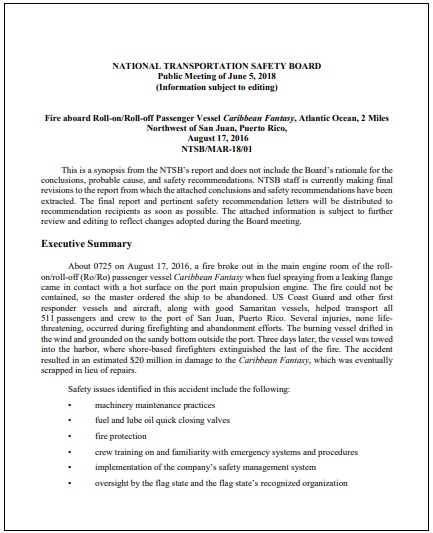