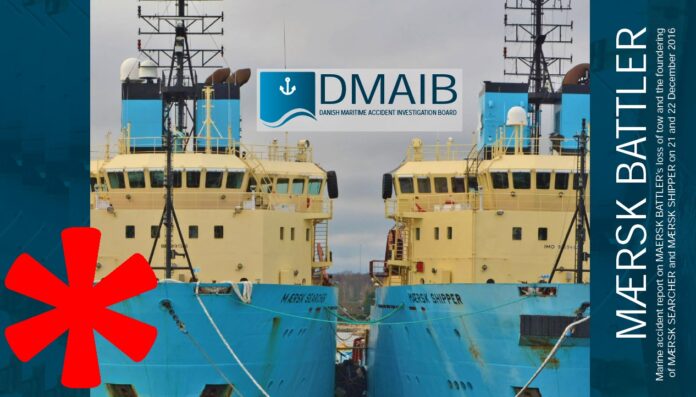 (www.MaritimeCyprus.com) The Danish Maritime Accident Investigation Board (DMAIB) issued the report of its investigation of the loss by the Maersk Battler of its tow of Maersk Searcher and Maersk Shipper in the Bay of Biscay on 21-22 December 2016. The root cause of the casualty was the decision to tow the two vessels side-by-side in prevailing weather conditions.

On the night between 21 and 22 December 2016, the Danish offshore supply ships MAERSK SEARCHER and MAERSK SHIPPER capsized and sank in the Bay of Biscay approximately 65 Nm off the French coast while being towed by the offshore supply ship, MAERSK BATTLER. The ships under tow were both unmanned during the voyage. Though no lives were at risk during the accident, the total loss of the two ships is considered a very serious accident of special concern to the potential risk of harm to the marine environment due to oil leakage.

Therefore, the Danish Maritime Accident Investigation Board (DMAIB) in agreement with the French authorities initiated an investigation of the accident to establish the circumstances leading to the foundering of MAERSK SEARCHER and MAERSK SHIPPER.

MAERSK SEARCHER and MAERSK SHIPPER capsized and sank as a result of having suffered severe structural damage while being under tow in the Bay of Biscay on the night between 21 and 22 December 2016.

The towage was configured as a side-by-side setup where the ships under tow were connected and considered to be one unit. When the towage was confronted with swell and waves causing increased motions of the ships, they did not behave as one unit, but as two individual units interacting. The only buffer separating the ships consisted of three fenders, which were unable to withstand the force of the coupled and interacting ships and hence failed. When MAERSK SEARCHER and MAERSK SHIPPER had been in direct contact and had collided continuously for 36 hours, structural damage compromised the watertight integrity of MÆRSK SEARCHER. The side-by-side setup rendered no contingency to disconnect MAERSK SHIPPER from MAERSK SEARCHER. Hence, when MAERSK SEARCHER capsized and sank, the crew had no option to recover MÆRSK SHIPPER, which capsized shortly after and subsequently sank.

The crew on MAERSK BATTLER did not perceive the direct contact between MAERSK SEARCHER and MAERSK SHIPPER as an emergency situation. The crew expected that the fenders of the side-by-side towing setup could fail during the tow and that the ships would suffer some damage to the accommodation on each of the ships under tow, but as they were to be recycled, damage above the waterline was accepted. This perception blurred the line between a successful operation and a critical situation and therefore the emergency situation was not evident to the crew until 10 minutes before the capsizing of MAERSK SEARCHER though both ships under tow had shown signs of significant structural damage 24 hours earlier.

The cause of the capsizing and foundering of MAERSK SEARCHER and MAERSK SHIPPER might seem simply to be the result of two ships being allowed to collide multiple times and a wrong choice of towing method. However, this assumption is oversimplified. Instead, this accident calls for understanding the complex circumstances of the lengthy preparation process during a period of organisational changes, which resulted in the decision to use an unconventional towing method. In this case, the choice of towing method was made on the basis of the limitations of another tug than MAERSK BATTLER, and there was no reason to change the towing setup to the setup recommended by external experts as the risk connected to the side-by-side tow had been handled in the risk management system and was thereby reduced to an acceptable level.

The risk of loss of fenders, collision and flooding of the unmanned ships under tow was addressed in the risk assessment carried out by the shore management. The risk assessment formed the basis of the decision whether the side-by-side towing setup was feasible and was perceived as a tool which would indicate whether the operation should be aborted as being too risky. However, the logic of the risk management system was to introduce risk mitigating initiatives for each risk factor so that the risk was assumed to be reduced to an acceptable level. However, the occurrence of the accident proves that these initiatives were ineffective. DMAIB concludes that the risk mitigating strategies were mainly focused on preventing risk factors in isolation and left little or no contingency for acute interaction between the risk factors. 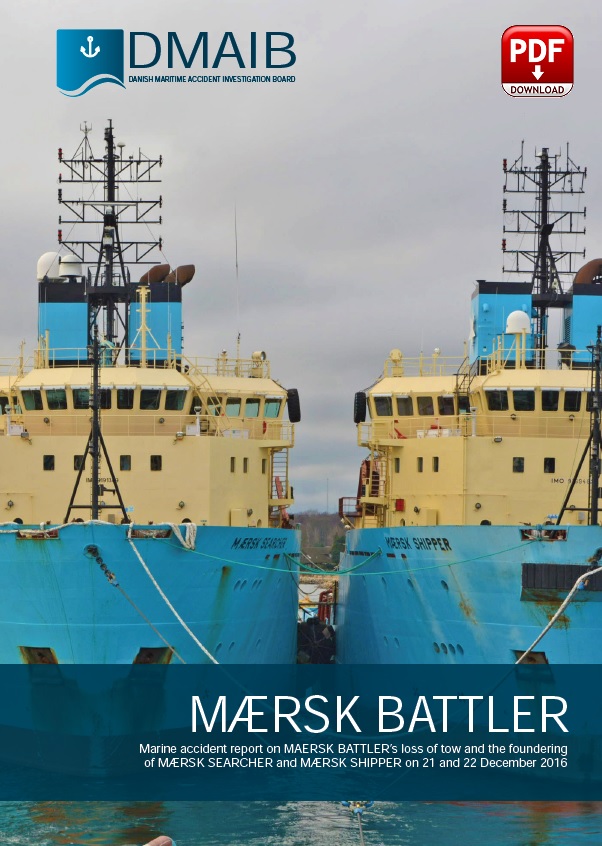