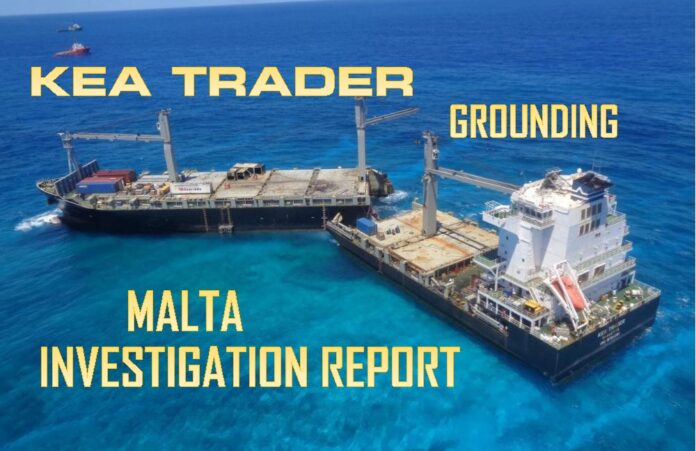 (www.MaritimeCyprus.com) Transport Malta issued the report of its investigation of the grounding of the container ship Kea Trader on a reef in the Pacific Ocean off New Caledonia on 12 July 2017.

The officer of the watch was monitoring the ship’s route on ECDIS, but failed to notice that the zone of confidence (ZOC) of the electronic chart was ‘D’ and a caution symbol was displayed. The ECDIS route check function had not been enabled. The audible alarm had been set to zero.

A salvage company was contracted by the managers to salve the vessel and to prevent marine pollution. The salvors reported water ingress in the double bottom tanks, duct keel and cargo holds. Containers in the lower tiers of the hold were flooded and fuel oil was detected in one of the cargo hold.

Pounded repetitively by heavy swell, Kea Trader’s engine-room bulkhead failed on 23 July. No oil pollution was reportedly observed in the sea. The vessel was declared a constructive total loss on 28 September.

On 12 November, the vessel was again struck by heavy weather, fracturing the hull in way of frame 92. Consequently, all personnel were evacuated from the vessel. On 04 December, Kea Trader broke her back approximately in the same position.

As a result of this investigation, the Marine Safety Investigation Unit (MSIU) has made recommendations to the managers of Kea Trader aimed at improving the standard of navigation of officers in their fleet using ECDIS as the primary means of navigation.