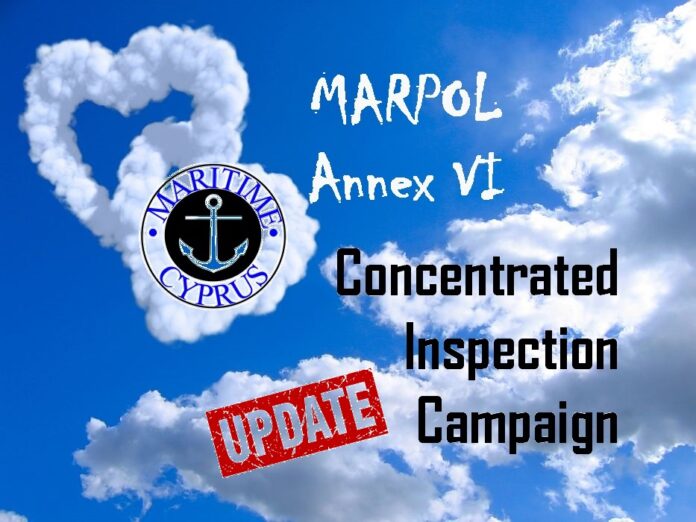 (www.MaritimeCyprus.com) The Maritime Authorities of the Tokyo and the Paris Memoranda of Understanding (MoU) on Port State Control will launch a joint Concentrated Inspection Campaign (CIC) on MARPOL Annex VI (Air pollution). This inspection campaign will be held for three months, commencing from 1 September 2018 and ending 30 November 2018. A ship will be subject to one inspection under this CIC during the period of the campaign.

The main objectives of this CIC are to:

Port State Control Officers (PSCOs) will use a list of 11 questions to assure that equipment carried onboard complies with the relevant statutory certificates, the master and officers are qualified and familiar with operations and that equipment is properly maintained and functioning.

Following international co-operation in the combat against acid rain and ozone depleting substances, the IMO, through the MEPC, included the issue of air pollution in its work programme. As a result of the work, through the Protocol of 1997, Annex VI has been included in the MARPOL Convention. MARPOL Annex VI sets limits on sulphur- and nitrogen oxide emissions from ship exhausts and prohibits deliberate emissions of ozone-depleting substances and volatile organic
compounds.

Both Secretary Hideo Kubota and Secretary General Richard Schiferli state: “Effective and uniform enforcement is a prerequisite for ensuring cleaner air and the full environmental impact of the regulation. In practice, this requires a high priority on enforcement and strong and effective cooperation between national port State control authorities”.

If deficiencies are found, actions by the port State may vary from recording a deficiency and instructing the master to rectify it within a certain period of time to detaining the ship until the serious deficiencies have been rectified. In the case of
detention, publication in the monthly detention lists of the Tokyo and Paris MoU web sites will take place.

It is expected that the Tokyo and Paris MoUs will carry out approximately 10,000 inspections during the CIC. The results of the campaign will be analysed and findings will be presented to the governing bodies of the MoUs for submission to the IMO.

The Checklist can be downloaded by clicking on below image:

The relevant guidance paper for the CIC campaign can be downloaded by clicking below on image:

Relevant presentation for the CIC campaign (provided by the Danish Maritime Authority) can be downloaded below: