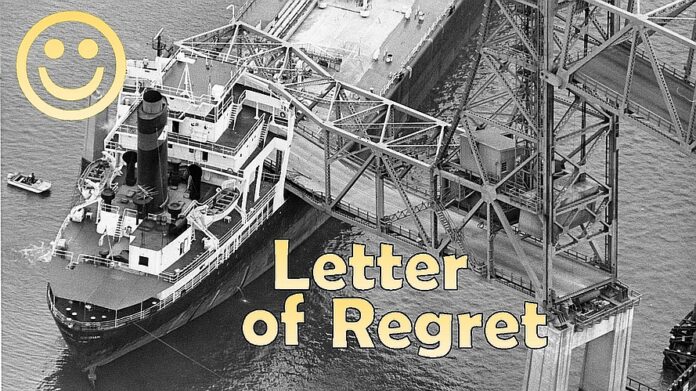 (www.MaritimeCyprus.com) The “Letter of regret” is a classic piece of dry humor that has been kicking around the maritime community for a long time. We could all use a little more humor in our lives. Consider this contribution from Dennis L. Bryant.

It is with regret and haste that I write this letter to you. Regret, that such a small misunderstanding could lead to the following circumstances, and in haste in order that you will get this report before you form your own preconceived opinions from reports in the world press. For I am sure that they will overdramatise the affair.

We had just picked up the pilot and the Apprentice had returned from changing the ‘G’ flag for the ‘H’ flag, and this being his first trip, he was having difficulties in rolling up the ‘G’ flag. I therefore proceeded to show him how it should be done. Coming to the last part I told him to “let go”. The lad although willing was not too bright, necessitating my having to repeat the order in a sharper tone of voice.

At this moment the Chief Officer appeared from the chartroom where he had been plotting the ships passage, and thinking that it was the anchor that was being referred to, repeated the ” let go ” order to the Third Mate on the foc’sle. The port anchor, having been cleared away but not walked out, was promptly let go. The effect of letting the anchor drop from the pipe while the vessel was proceeding at full harbour speed proved too much for the windlass brake, and the entire length of the port cable was pulled out by the roots. I fear that the damage to the chain locker may be extensive. The braking effect of the anchor naturally caused the vessel to sheer in that direction and towards a swing-bridge that spans a tributary to the river up which we were proceeding.

The swing-bridge operator showed great presence of mind by opening the span for my vessel to go through. Unfortunately he had not thought of stopping the vehicular traffic. The result being that the bridge partly opened and deposited a Volkswagen, two cyclists and a cattle truck on the foredeck. My ships company are at present rounding-up the contents of the latter, which from the noise, I would say are pigs. In his effort to stop the progress of the vessel, the Third Mate dropped the starboard anchor. Too late to be of any practical use, for it fell on top of the swing-bridge operators control cabin.

After the port anchor was let go and the vessel started to sheer, I rang ‘full astern’ on the engineroom telegraph, and personally telephoned the engineroom to order maximum revolutions. I was informed that the sea temperature was 53 degrees, and was asked if there was going to be a film tonight. My reply would not contribute constructively to this report.

Up to now I have confined my report to the activities at the forward end of my vessel. Back aft they were having their own problems. At the moment the port anchor was let-go, the Second Mate was supervising the making-fast of the after tug, and was lowering the ships towing spring onto the tug. The sudden braking effect of the port anchor caused the tug to ‘run in under’ the stern of my vessel, just at the moment when the propellor was answering my double ring for ‘Full astern’. The prompt action of the Second Mate in securing the inboard end of the towing spring delayed the sinking of the tug by some minutes thereby allowing the abandonment of the tug.

It is strange, but at that very moment of letting-go the port anchor, there was a power cut ashore. The fact that we were passing over a ‘cable area’ at the moment could suggest that we may have touched something on the bottom of the riverbed. It is perhaps fortunate that the high-tension cables brought down by the foremast were not live, possibly they had been replaced by the underwater cable. But owing to the shore blackout, it is impossible to say where the pylon fell.

It never fails to amaze me, the action and behaviour of foreigners during moments of crisis. The Pilot for instance, is at the moment huddled in the corner of my day-cabin, alternately crooning to himself and crying, after having consumed a bottle of my gin in a time that is worthy of inclusion in the Guinness Book of Records. The tug captain, on the other hand, acted violently and had to be forcibly restrained by the Steward, who now has him handcuffed in the ship’s hospital where he keeps telling me to do impossible things with my ship and my person.

I enclose the names and addresses of the drivers and the insurance companies of the vehicles on my foredeck which the Third Officer collected after his somewhat hurried evacuation of the foc’sle. These particulars will enable you to claim for the damage that they caused to the railings at number one hold.

I am enclosing this prelimenary report, for I am finding it difficult to concentrate with the sound of the police sirens and their flashing lights. It is sad to think that had the Apprentice realised that there was no need to fly pilot flags after dark none of this would have happened. For the weekly Accountability Report I will assign the following casualty numbers : T75001 to T75100, incl.,