More
Facebook
Linkedin
Twitter
Home News LNG ship orders pour in: Is it too little too late, or... 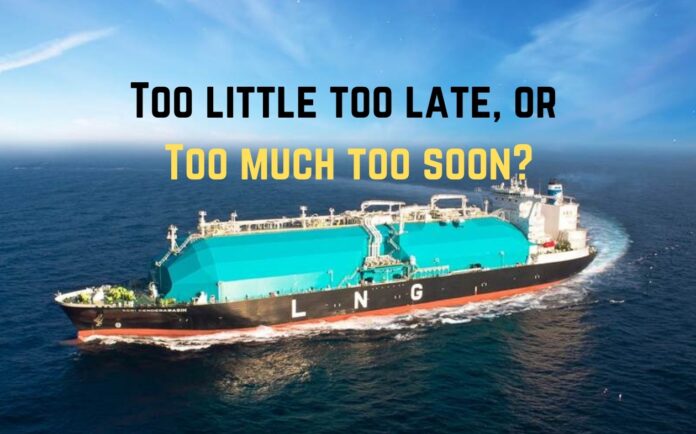 (www.MaritimeCyprus.com) 33 new LNG ships have been ordered so far this year, compared to 19 in the whole of 2017 and just six in 2016. Owners have been tempted by higher spot/short-term charter rates, still-low new-building prices and rapidly growing LNG trade. New LNG supply is being absorbed far more easily than many expected by booming demand in Asia. A new wave of FIDs on new supply projects is expected to create even more demand for shipping. But owners need to be careful they don’t over order. There is still a huge number of ships ordered in the 2011-2014 LNG new-building boom to be delivered to the fleet and there is a long history of new ships arriving before new supply.

New LNG supply is creating new trade routes
LNG shipping is benefiting from an unprecedented wave of new LNG supply projects coming on stream in a relatively short period. Between 2015 and 2020 LNG production is forecast to increase by over 150 mmtpa; in comparison, supply rose by just 20 mmtpa in the five year prior to 2016. For LNG shipping this supply boom is particularly beneficial, as much of it is coming from the US Gulf which is a long way from the largest LNG markets in Northeast Asia. To move 1 mmtpa of LNG from the US Gulf to Japan requires 1.9 ships, compared to 0.7 to move the same amount of LNG from an Australian project.

Record demand from China
The huge increase in LNG supply has so far been comfortably absorbed by rapid growth in demand. China has been at the forefront of demand growth with imports in the first half of 2018 up 50%, following 46% growth in 2017. Chinese LNG demand is also taking a more pronounced seasonal shape as new terminals have opened up in the north of the country requiring more LNG in the winter months.

FIDs imminent on next wave of LNG supply
The apparent ease by which the current wave of new LNG supply is being absorbed by markets has turned attention to who will develop the next wave of LNG supply. Wood Mackenzie currently forecast that 114 mmtpa of new LNG capacity will take FID between 2018 and 2021. These pre-FID projects will not provide any new LNG to the market until at least 2023 and most of it is unlikely to be available to ship before 2025. Between the current wave of new LNG supply and the anticipated pre-FID wave there will be a period of low LNG supply growth. Ships being ordered now will deliver just in time for the start of the period of low supply growth.

New ships versus old
Vessel design and technology advances have seen the typical new order LNG ship become larger and more efficient, making ships ordered even three or four years ago outdated. Ship orders now are typically sized at 170-180,000m³, compared to 155,000m³, dues to design advances and to maximize carrying capacity through the newly expanded Panama Canal. In addition, the introduction of gas-injection slow-speed engines has offered fuel savings of over 20 tonnes per day even against modern DFDE/TFDE engines and 75 tonnes per day against older steam ships.

Huge order-book to be delivered
So far this year 36 new vessels have been added to the fleet and three have been scrapped. A further 22 are scheduled for delivery before the end of the year – if these vessels are delivered on time and no further vessels are removed from the fleet, capacity will grow by 13.0% in 2018 (up from 6.8% in 2017). The 37 vessels currently scheduled for delivery in 2019 will grow the fleet another 7.6%. LNG trade is growing strongly but our forecast of an 8.2% expansion in 2018 lags behind fleet capacity growth. More long-haul imports from the USA to Asia should see tonne-mile demand grow at a faster rate, leaving a delicate balance between supply and demand for LNG ships. But forecast trade growth of 13.7% in 2019 should tip the balance in favor of ship owners.Asia see more US exports attracted to long-haul destinations, taking ships out of the Atlantic basin. This drives up charter rates globally, but drives up rates even higher in the Atlantic basin. In June charter rates in the Atlantic basin peaked at around US$90,000/day, whilst rates in the Pacific Basin at the same time were closer to US$70,000/day.

Industry outlook – too little too late or too much too soon?
LNG is one of the fastest growing sectors in shipping and design advances have made new ships more attractive compared to much of the existing LNG fleet. The market clearly wants more of these new ships and it could be said orders have been too little too late. But looking at the wider picture there is a lot of new capacity still to be delivered from the current order-book. There is under-used and laid-up older shipping capacity that could be more fully employed. The next pre-FID wave of LNG supply won’t come on stream until mid next decade. If ordering activity continues at recent levels there is a high danger that it will be too much too soon!