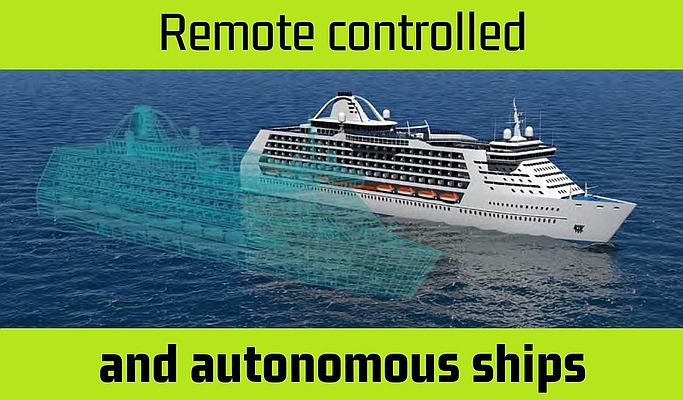 (www.MaritimeCyprus.com) Throughout history, ships have been operated by people. The number of people required for operating a ship has depended on the size, type and mission of the ship as well as the technologies utilized to carry out the various functions required to safely operate the ship for its intended purpose. Some of these functions, such as navigation and maneuvering, mooring and anchoring, have traditionally required the attendance of one or several people for carrying out the functions and for maintaining their reliability. Other functions such as watertight integrity and stability do not typically require the attendance of people.

Throughout history, technological developments have reduced the requirements for attending crew members to carry out functions. For example, the operation and maintenance of an early 20th century coal-fired steam engine for a large ship could require a crew of several hundred), but with the introduction of diesel engines, this number decreased significantly. Increased automation of diesel engine operation and reduced requirements for maintenance have reduced the size of the machinery crew to less than ten, even for the largest engines. Recent developments in automation are, in theory, making it possible to further reduce or even eliminate the crew in attendance for carrying out ship functions. However, this requires that observations and decisions are made by crew off the ship (remote monitoring and control) or by the system itself by means of algorithms (autonomy).

Reducing or eliminating the attending crew also requires that provisions be made for ensuring the reliability of these functions. If all required ship functions are fully automated and operated remotely or autonomously, one could theoretically remove all crew from the ship. However, the motivation for introducing remote-controlled and autonomous functions is not necessarily to remove attending crew, but rather to improve the efficiency of the ship’s operation as well as the performance and/or safety of the function with crew in attendance.

In this paper, we discuss the feasibility and merits for automating ship functions and controlling them remotely or autonomously. We also discuss the technologies required to do this and their maturity. The main challenge for implementing fully automated systems controlled by remote operators or by algorithms is not to make them work, but to make them sufficiently safe. What is sufficiently safe, or has a tolerable risk level, will most likely be defined by a competent authority such as the International Maritime Organization (IMO) and flag states for any given operation. The competent authority would then have to build a safety regime with supporting regulations and instruments to reach this goal; a safety regime that is also socially acceptable by the wider public. The IMO as well as some flag states have already started to evaluate what is required through the use of scoping exercises and preliminary national regulations. The second part of this paper describes the current regulatory work and suggests how a safety regime could be defined.

For read the full report, click on below link.