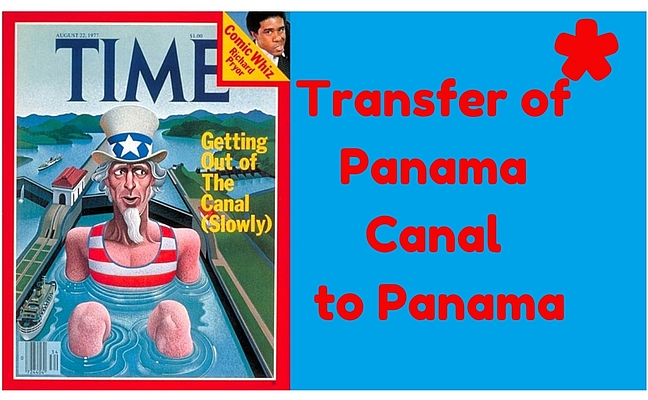 (www.MaritimeCyprus.com) On this day in 1977, President Jimmy Carter signs a treaty that will give Panama control over the Panama Canal beginning in the year 2000. The treaty ended an agreement signed in 1904 between then-President Theodore Roosevelt and Panama, which gave the U.S. the right to build the canal and a renewable lease to control five miles of land along either side of it.

The desire for a shorter route between the Atlantic and Pacific oceans had a long history, beginning with the Spanish explorers of the 16th century. Before the canal was built, ships were required to travel around the treacherous Cape Horn of South America, a journey that frequently resulted in great loss of life and cargo. From 1869 to 1877, U.S. President Ulysses S. Grant authorized no less than seven feasibility studies of a canal across the thin Panamanian isthmus. In 1881, a French consortium of investors hired Suez Canal designer Ferdinand deLesseps to build a canal through Panama. The French project was called off in 1888, however, after workers died by the thousands from disease and construction accidents.

In 1904, building a canal across Panama became a pet project of President Theodore Roosevelt; the effort was led by American engineer John Stevens. Although death from jungle diseases decreased with the implementation of an improved sanitation system, designed by Dr. William Gorgas, the project dragged on so long that Stevens quit in despair. In November 1906, in an attempt to boost flagging morale and dwindling Congressional support for the project, Roosevelt visited and posed for photographs at the site, sitting at the controls of an enormous earth-moving tractor.

In 1914, after 10 years, Roosevelt’s perseverance paid off; the 51-mile-long canal opened on August 15. The engineer who took over for Stevens quipped at the opening of the canal that “the real builder of the Panama Canal was Theodore Roosevelt.” The canal facilitated increased passenger travel and cargo shipments between nations around the world and U.S. control over the canal helped guarantee America’s status as an international power.

Transfer of ownership of the Panama Canal occurred peacefully as planned on December 31, 1999.