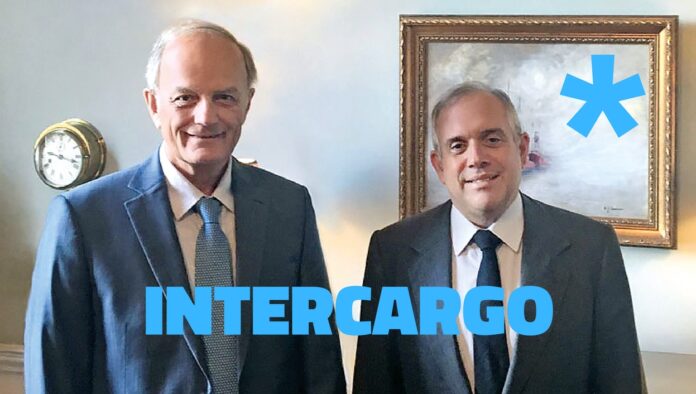 (www.MaritimeCyprus.com) Intercargo unanimously elected its technical committee chairman Dimitris Fafalios from Fafalios Shipping to lead it as President from January 1 2019, replacing John Platsidakis who has been chairman for the past six years and has reached the three-term maximum appointment length.

After the elections that took place on Tuesday, October 2, 2018 in London, he received the "baton" from Mr. Ioannis Platsidakis, who completed 6 creative years at the wheel of the International Union of Dry Cargo Owners.

It is noted that INTERCARGO represents the interests of dry cargo ship owners and plays a particularly important role both within the International Maritime Organization (IMO) and at the International Maritime Fora. Based in London, the creation of the late Antonis Chandris has been under the leadership of major Greek presidents for 14 consecutive years. Prior to Mr. Platsidakis' term, the chairman was Mr. Nikolaos Pappadakis.

Dimitrios Fafalios is President and Director of Fafalios Shipping SA from 2008 to today. From 1984 to 2008 Mr. Fafalios held several managerial positions at the historic company Fafalios Ltd. in London.

The new President of INTERCARGO is a graduate of the Naval Architecture and Ship Building Department of the University of Newcastle upon Tyne, and holds a Masters Degree in Ocean Systems Management from MIT. Mr. Fafalios has previously held the position of Chairman of the Technical Committee of INTERCARGO, while he still holds important positions in various shipping associations and committees.

It is worth mentioning that the new INTERCARGO president's brother, Charalambos I. Fafalios, has for several years been president of the Greek Shipping Co-operation Committee in London.

The term of office of outgoing INTERCARGO President and Chief Executive Officer of Anangel Maritime Services Inc. Mr. Ioannis Platsidakis, is characterized by experienced observers and connoisseurs of maritime issues as very successful, having succeeded in registering more than 1,200 ships in the international union and thereby strengthening his voice in a difficult period for fares in dry loads. It is noted that INTERCARGO currently has 2,200 vessel-members.

Mr. Ioannis Platsidakis, awarded with the "Evkrantis" award from "Nautical Chronicles" in 2010, a graduate of the Aristotle University of Thessaloniki and the London School of Economics, has been a member of the Executive Committee of INTERTANKO for the period 2009-2015, Vice- INTERCARGO in the period 2004-2012, as well as its President during the years 2012-2018.

Mr. Platsidakis actively and extensively deals with issues of financing and expansion of the most important for the Greek shipping portfolio of Angelikousis Group, for whom he has been working for over 30 years.

Mr Fafalios will take up his new duties at INTERCARGO on 1 January 2019.