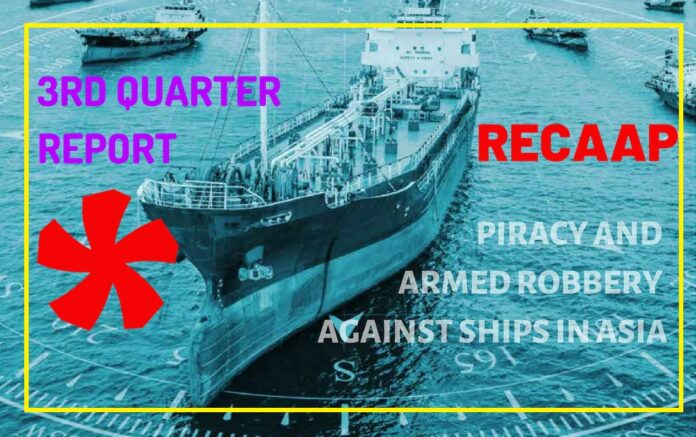 Although the number of incidents has decreased, there remains imminent threat of abduction of crew in the Sulu-Celebes Seas and waters off Eastern Sabah, as demonstrated by the latest incident of abduction of two fishermen from a fishing boat (Sri Dewi 1) on 11 Sep 18 in waters off Eastern Sabah. Ships are strongly advised to enhance vigilance against presence of suspicious boats; and enforcement agencies are requested to enhance patrol and surveillance in areas of concern and make quick response to all incidents. Ships at slow speed and low freeboard such as fishing boats and tug boats are mostly boarded, but bigger merchant ships can be also targeted as occurred in the past. ReCAAP ISC maintains its advisory issued via its Incident Alert on 21 Nov 16, advising all ships to re-route from the area, where possible.

Otherwise, ship masters and crew are strongly urged to exercise extra vigilance while transiting the area and report to the relevant reporting centres.

There was no actual incident of hijacking of ships for theft of oil cargo. Two attempted incidents of suspicious intention to steal oil cargo were reported on 1 Jun 18 and 4 Aug 18. In both incidents, Malaysian Maritime Enforcement Agency (MMEA) successfully arrested the mastermind and perpetrators.

Of concern is the increase in incidents on board ships at ports and anchorages in Chittagong, Bangladesh and off Samarinda in East Kalimantan, Indonesia; as well as on board ships while underway in the Straits of Malacca and Singapore (SOMS) during January-September 2018 compared to the same period in 2017.

ReCAAP ISC encourages ship master and crew to report all incidents of piracy and armed robbery against ships to the nearest coastal State and flag State, exercise vigilance and adopt relevant preventive measures taking reference from the
Regional Guide to Counter Piracy and Armed Robbery Against Ships in Asia. ReCAAP ISC also urges enforcement agencies to provide quick responses to reports of incidents and render assistance to victim ships.