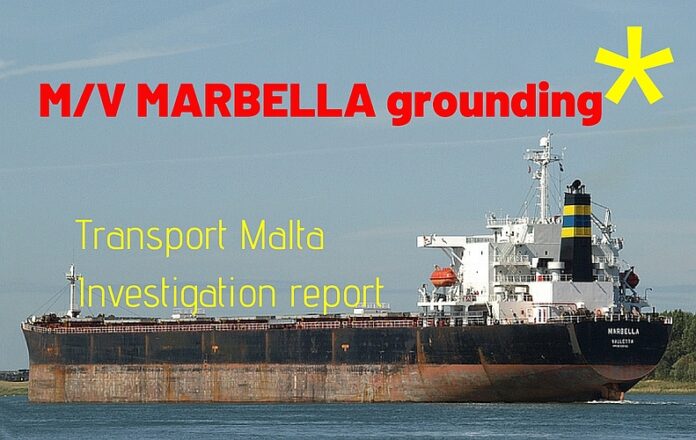 (www.MaritimeCyprus.com) Transport Malta issued the report of its investigation of the grounding of the bulk carrier Marbella on North Reef in the Paracel Islands on 28 September 2017. The grounding occurred after the second mate altered course to avoid a number of fishing vessels and failed to see the reef on the ECDIS.

At 2350 on 26 September 2017, Marbella departed Hong Kong for Tarahan Coal Terminal in Indonesia. The following day on, 27 September, the master instructed the second mate to amend the route in order to comply with the charterers’ suggested route.

At 0000 on 28 September 2017, the second mate arrived on the bridge for his navigational watch. At the time, Marbella was making good a course of 205°. The speed was 11.7 knots. The second mate recalled that he did not see North Reef on the ECDIS and he therefore monitored traffic on the radar.

At 0145, he changed the course to starboard to pass a group of fishing vessels. He reported that while on this course, he saw lights ahead flashing. He judged them for fishing nets signal and set the course to port to pass between the flashing lights.

At 0327, Marbella shuddered to a complete stop as she grounded on North Reef in position 17° 06.80ʹ N 111° 30.62ʹ E. No injuries and pollution were reported but the vessel sustained structural damages in way of her double bottom tanks and bottom shell plating.

The Marine Safety Investigation Unit (MSIU) concluded that whilst steering a course to clear fishing vessels Marbella navigated into shallow waters and ran aground on North Reef, Paracel Islands. As a result of the safety investigation, two recommendations were made to the Company in order to address then use of electronic equipment on the bridge and the posting of a look-out on the bridge during the navigational watch.

The Marine Safety Investigation Unit (MSIU) concluded that, whilst steering a course to clear fishing vessels, Marbella navigated into shallow waters and ran aground on North Reef, Paracel Islands.

In view of the conclusions reached and taking into consideration the safety actions taken during the course of the safety investigation, Transport Malta advises TMS Bulkers Limited to: