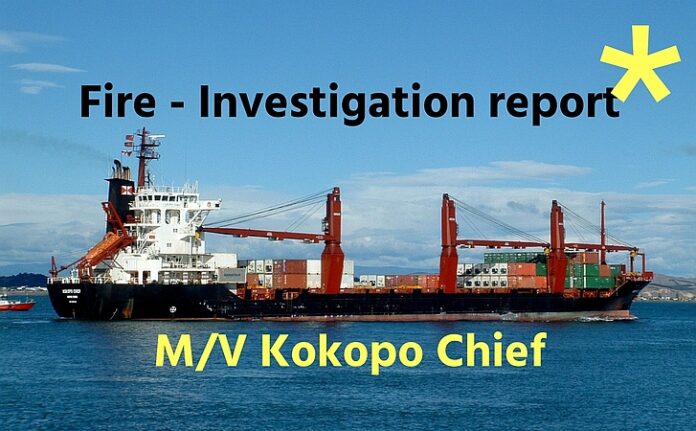 (www.MaritimeCyprus.com) The New Zealand Transport Accident Investigation Commission (TAIC) issued the report of its investigation of the 23 September 2017 fire in a cargo hold of the multipurpose/container vessel Kokopo Chief at the Port of Tauranga.

The number 4 cargo hold was loaded with tiers of packaged timber. When loading was completed, the hatch lid was closed and containers loaded on top. Shortly before midnight the ship’s smoke-detection system alarmed, alerting the crew to a fire that had broken out in number 4 cargo hold. The crew response to the fire included activating the ship’s fixed carbon dioxide (CO2) fire-extinguishing system, which involved sealing the cargo hold and releasing liquid CO2 into the cargo hold. The fire was eventually extinguished. Investigation revealed that the probable cause of the fire was the failure to extinguish the incandescent reflector lamp in the hold before the hold was sealed.